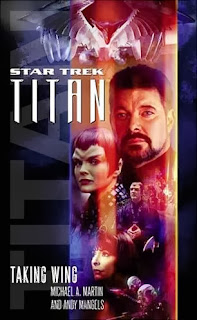 The idea of a novel series putting William Riker in command of his own starship is very appealing. The guy deserves it. However, Star Trek: Titan #1: Taking Wing by Michael A. Martin and Andy Mangels (Pocket books, ebook, 5700ll; Kindle purchase), first in the Star Trek: Titan series, does him no justice. It begins during the events of the painfully dull and frustrating Star Trek: Nemesis, which perhaps explains why it took me eight years to read more than the first few pages. Poor old Spock is shown to be still stuck in hiding on Romulus – where he was parked in the Next Generation two-parter “Reunification” – when Tom Hardy makes his bid for power.

Leaving him among the chaos, we travel to Captain Riker, touring his new ship, excitingly the most species-diverse the Federation has ever seen. The ship’s doctor sounds like the result of a facehugger infecting a dinosaur, the astrophysicist is from a zero g world, and another crew member requires an aquatic cabin. But that’s about as exciting as it gets, bar a prison breakout and a quick space battle towards the end. The tour over, the ship is soon sent off on a diplomatic mission to Romulus, where various factions, including the Remans, are battling for supremacy now that Hardy has moved on to better roles.

The Titan’s mission is to make sure nothing interesting happens.

The problem of Trek in its later years has been in finding new chunks of space to explore: the other side of DS9’s wormhole, Voyager in the Delta Quadrant, the Thallonian Empire of Peter David’s New Frontier series. Star Trek: Enterprise felt like it was pottering about in the Vulcans’ backyard. The new films give up on that and settle for making the most of the established locations. In theory, Star Trek: Titan has the widest of open roads ahead, the future of the Trek universe, but it’s too bogged down in continuity to fully explore it.

Everything’s already been decided, little can be changed, and we’re left with a talky adventure that only highlights the sense of narrative exhaustion in the Trek universe, a universe that was once about the three Fs – fighting, f**king and thinking – but was by Nemesis a succession of meetings around a desk, a tradition ignobly continued here. No wonder there are hardcore Trek fans who hate the new films: with every shining, sexy frame they show how badly astray the franchise had gone.

Many of the crew members here seem to be from various television episodes and spin-off novels; I’m not enough of a fan to always know which ones, my Trek encyclopaedia is out of date and I couldn’t be bothered to look them up online. But though the book isn’t considerate enough to give us a footnote or two explaining the sources, it gets constantly bogged down in making sure the reader knows the ins and outs of their life stories. Anything that has ever happened to the character seems to get a reference, all of which would have been better left to be revealed when other characters showed an interest.

It’s a tedious, self-parodic book, no character apparently able to utter a line without it being bracketed by sentences explaining exactly what they meant by what they said, how they feel about it, or how they think the person they are talking to might take it. This reaches its nadir in conversations involving Deanna Troi, still gamely trying to show that a shoulder to cry on is the most important component of a starship. After a Romulan says “[Y]ou are a liar or a fool, human. Which is it?” to a Starfleet admiral, we learn that “Deanna felt haughtiness, with a sprinkling of surprise”. Thanks for that, Deanna.

So why did I read it to the end, even when I had much better books on the go? Well, it was on the Kindle and I was supposed to be reading a paper book and however good the paper book I always drift away, and here’s where I drifted. (Technically the ebook is fine, but it’s worth noting that Kindle use is restricted to four devices, an annoyance for those of us who like to read on whatever device is closest to hand.) And it’s Riker and Troi: however dull the adventure I’m interested in what’s happening to them. Another thing I liked was that it seems to establish (though maybe it was already established elsewhere and I’ve forgotten) that Tuvok was the guy who looked a lot like Tuvok on the bridge of Captain Sulu’s ship in Star Trek VI. That was nice.

I’m sure that there are good Star Trek novels written by people other than James Blish, Peter David and Alan Dean Foster, but this isn’t one of them.
Posted by Stephen Theaker