We See a Different Frontier, edited by Fabio Fernandes and Djibril al-Ayad | review by Stephen Theaker 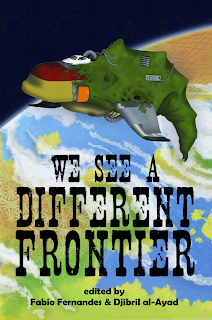 We See a Different Frontier (The Future Fire, ebook, 3447ll; Kindle purchase), edited by Fabio Fernandes and Djibril al-Ayad, is an anthology of sixteen stories, and also a special issue of the magazine The Future Fire, which publishes fantasy work with a political edge. After a year’s hiatus, the magazine encouraged applications from potential guest editors. That led first to Outlaw Bodies, edited by Lori Selke, and now to this book. The submission guidelines set an interesting challenge: to approach science fiction from the point of view not of those pushing the frontier out, in their wagon trains to the stars, but from the perspective of those who have experienced the expanding frontier from the other side. When I read the guidelines, my thoughts went towards the alien experience of human expansion, but the introduction makes it clear that the editors were more interested in “us, the aliens from Earth. Foreigners. Strangers to the current dominant culture.” And so only a few of the stories are set in space, most being set here on Earth, using science fiction to address historical, contemporary and controversial issues directly, rather than retreating to the safe Star Trekkian distance of metaphorical alien planets.

But those stories that feature aliens use them well. In “Them Ships” Silvia Moreno-Garcia considers how the flattening of human social structures by an alien invasion might not be entirely unwelcome among those currently at the bottom of the pile. A spacecraft hangs over the city in “A Bridge of Words” by Dinesh Rao, broadcasting an incomprehensible message, while Riya researches the tattoos of the country she left behind. Both are good stories, but Sunny Moraine’s “A Heap of Broken Images” is astonishing. It’s the heartbreaking story of an alien guide showing insensitive human tourists around the scene of a massacre. The story’s point is made by how unsurprised the reader is to learn what happened.

“What Really Happened in Ficandula” by Rochita Loenen-Ruiz is the only other story to take us off-world. It begins with a strong taste of Battlestar Galactica, as Gemma’s ship arrives at New Cordillera after six hundred and twenty leaps to throw off their pursuers, but it develops very quickly into a fine story with its own flavour that draws on the kind of shameful incidents that go hand in hand with imperial power and colonisation: forced migration, forced adoption, trigger-happy soldiers.

Some stories show us the survivors of global catastrophes, such as Joyce Chng’s “Lotus”, which shows people surviving in a waterlogged land, who find a wonderful source of fresh water and must decide whether to claim ownership of it, given all the consequences that defending it might bring. “Fleet” by Sandra McDonald is the story of a girl called Bridge who used to be a boy named Magahet Joseph Howard USN. She’s married to a man whose other wife hopes she’ll “be gored to death by a goonie pig”. Bridge’s people live on an island which was once part of an empire, and isn’t any more, and they have mixed feelings about re-establishing contact with whatever’s left of civilisation.

Shweta Narayan’s “The Arrangement of Their Parts” is set in 1665, where an Englishman is trying to exploit clockwork life forms, while “Forests of the Night” by Gabriel Murray is told by the unacknowledged son of an English captain, who brings him back to England from Kuala Lumpur. The mother is left behind, the boy employed as a valet. Something is killing sheep, horses and then men, and it needs to be hunted. Though they’re not writers one would expect to meet at this party, Kipling and Doyle came to mind, and the story isn’t embarrassed by the comparison. “Pancho Villa’s Flying Circus” by Ernest Hogan sees Tesla creating a helicopter-borne death ray for Mexican revolutionaries, only for it to be hijacked by a guy angry about Hollywood’s cultural appropriation of his girlfriend. It’s the kind of pulpy cartoon story with a serious theme that would fit neatly into an Obverse anthology. “I Stole the D.C.’s Eyeglass” is about a girl who worries for her stubborn sister, Minisare, who disappears off into the forest and doesn’t want to be given a husband. Sofia Samatar shows a community ruined by commercial exploitation, so used to the roar of machinery that the children can all read lips – but it ends on a hopeful note.

Lavie Tidhar is one of my favourite writers at the moment and “Dark Continents” is another excellent story from him. “We began to edit, but we were sloppy at first”, we read. That process created a new role for Livingstone, an African invasion of the confederacy, a Jewish homeland in Uganda. Style, ideas, storytelling: Tidhar’s stories excel in every area. A sentence here sums up the injustice of colonialism: “We had moved en masse to this land, empty but for its people, granted to us by the power of British empire and its King and parliament.”

Another of my favourite stories in the anthology was “Old Domes” by J.Y. Yang. Jing-Li is a cullmaster of buildings: when they are to be knocked down or refurbished she must clear the way by killing their guardian spirits. The story looks not just at the ongoing after-effects of colonialism, but also at the histories lost as colonial powers impose a new year zero. And it also has some good fights! “How to Make a Time Machine Do Things that Are Not in the Manual or The Gambiarra Method” is a Rudy Ruckerish story by Fabio Fernandes about researchers who discover time travel “during experiments on locative media and augmented reality as applied to elevators”. This makes sense, since even ordinary lifts are known to cause time dilations. “Droplet” by Rahul Kanakia inverts the usual story of the Indian emigrant who agonises over having taken their skills abroad – see for example the film Swades – to show what happens when they return to India, in this case because the USA has begun to dry up.

“Vector” is a cyberpunk story told in the second person by Benjanun Sriduangkaew: “You. Are. (A weapon. A virus. A commandment from God.)” You are literally plugged into the internet, and the hope is that you’ll do something to reverse the exploitation of your country and the steamrolling of its culture, a recurring theme in the book: “This is how to rewrite a country’s past, and when a past is gone it is easy to replace the present with convenience.” Similar themes are explored in “Remembering Turinam” by N.A. Ratnayake, despite its more historical (or fantastical?) setting. This wasn’t my favourite of the stories here, its protagonist Salai a bit too self-righteous and unpleasant to carry the reader. The story is essentially a conversation, the subject the active erasing of the Turian language by the Rytari invaders, and the question of whether it should be restored, and if so how. An exploration of the viral nature of language might have been very interesting in this context – you can’t keep a good word down! – but language is a topic big enough to inspire an anthology in itself, and a story shouldn’t be blamed for not exploring every angle.

The book was hardly published in hopes of a pat on the head from a white Englishman, and even the act of reviewing it – issuing my judgment upon the hard work of these plucky foreign types! – seems to go against the spirit of the book. The afterword by Ekaterina Sedia is a more sensitive response to the book’s themes than I could ever write (though if I had thought like her that the stories shared an anti-scientific theme I would have seen it as a weakness rather than a strength). But, for what my opinion is worth, I thought the book was absolutely terrific. The short length of the stories meant none had time to waste, and there is a great deal of variety. It’s full of surprising plots and perspectives, and if the premise of the book might make you expect a lecture, don’t think of the finger-wagging kind, think more of an inspirational guest speaker who opens your eyes to new ideas and new approaches. Many anthologists, when asked about the lack of diversity in their work, declare that they care about quality and not quotas. This book shows that diversity needn’t come at a cost, and is in fact an extremely valuable quality for an anthology.

On the technical side, the Kindle edition is fine, apart from (on my devices, at least) being set in block paragraphs with a line space between. That could be a deliberate choice – it does look rather elegant – but it means more page turns, especially on smaller screens. Other than that, the book is very highly recommended.
Posted by Stephen Theaker