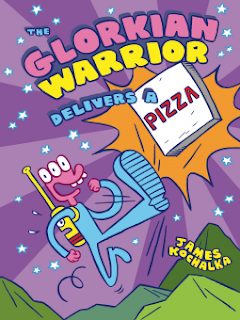 I’ve read a lot of James Kochalka since his stuff began to appear on Comixology – for example I purchased each of his American Elf digital collections (one per year from 1997 to 2008, so far) the second I’ve seen them. Partly because they’re so cheap, because I do like a bargain, but mainly because they’re so good. His previous books for children, Dragon Puncher and Johnny Boo and their sequels, were excellent, but very short (making them good for bedtimes), and The Glorkian Warrior Delivers a Pizza is even better, and much longer. There’s a Groo-ish quality to it which was very appealing. The Glorkian warrior is a heroic, good-natured but idiotic warrior determined to complete his silly quest, with his Super Backpack (like Groo’s dog Rufferto) an adoring, slightly smarter companion who can’t do much to change their course. It’s appealingly colourful, good-natured and silly, and would make a super birthday present for any under-tens or reluctant readers. Don’t be surprised if older brothers and sisters take an interest too.
Posted by Stephen Theaker