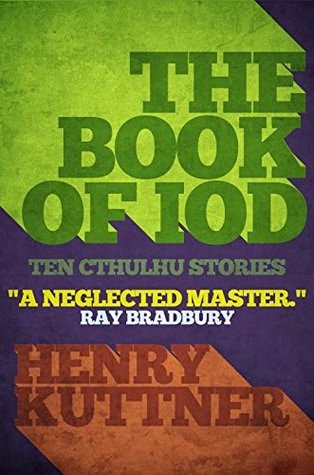 What a surprise: if I ever knew that Henry Kuttner had written Cthulhu mythos stories, I had forgotten it long before seeing this book. What mad nightmares could spring from the imagination that brought us “The Last Mimzy”? Unfortunately, Book of Iod: Ten Cthulhu Stories (Diversion Books, ebook, 2187ll) is slightly mistitled, since Cthulhu (bless his name!) is only mentioned in passing twice. “The Invaders” is the most traditional mythos story, about a writer whose drug-assisted time-travelling for inspiration has opened the way for things that shouldn’t be here. Kuttner’s stories differ from Lovecraft’s, though: Cthulhu here is almost the hero of Earth, having fought off these things before, a bit like Godzilla. Not many mythos stories end with a human saying, “I felt a wave of reassurance. Suddenly all fear left me.”

“The Secret of Kralitz” has a mere mention of the mythos. The new Baron Kralitz learns the dark secret of his family, in the course of carousing with his reanimated ancestors. “Spawn of Dagon” is a REHesque adventure where a pair of quarrelling adventurers are sent to kill a wizard, who turns out to have been protecting Atlantis all along. “The Eater of Souls” is a rather groovy story about the Sindara, the ruler of Bel-Yarnak, who goes to face a dweller in an abyss, while “The Jest of Droom-avista” describes the final fate of Bel-Yarnak. “Hydra” is about an experiment in astral travelling that goes horribly wrong, leaving an unfortunate expert without a head. The final image is one of the best in the book, but, as so often in this book, this is a story where, if you’re clever enough, there is a way out.

Witches are a common theme. “The Salem Horror” is about a writer who finally finds the perfect place to write: a hidden room in a house that once belonged to a witch. The mysterious markings on the floor simply add to the atmosphere! In “The Frog” an artist wants the “witch stone” removed from the garden of his rented place. This foolishness lets out the witch buried there, who in the centuries of being buried has come to resemble her master (see title for details). Turns out that giant frogs are surprisingly scary.

“Bells of Horror” tells us of “the lost bells of Mission San Xavier”. They are found in California and ringing them again causes all kinds of trouble. The most alarming part of this story is a toad that has worn away its own eye, scraping it against a rock to ease the supernatural irritation. Once again “the quick actions of one man … saved the world”. “The Hunt” is about Alvin Doyle, who wants to kill his cousin to gain himself an inheritance. His cousin has a cabin, and you can probably guess what kind of thing he has been doing there. Yes, “calling up an entity which mankind worshiped years ago as – Iod. Iod, the Hunter.” The Dimension Prowler!

I think the present popularity of Lovecraft’s work has little to do with his prose or actual stories and more to do with creating a shared universe in his stories, a relatively fresh alternative to the Christian, Greek and Viking myths, and then throwing it open to others to use. Sometimes, like here, his mythology is used in ways that don’t much resemble Lovecraft’s work, except on the surface. I wasn’t crazy about this book, and the stories felt oddly optimistic, but I read it quickly enough and wouldn’t have minded reading another in the same vein. Not the best Cthulhu stories I’ve read, not the best Henry Kuttner stories I’ve read, but still interesting to see the two interact. ***
Posted by Stephen Theaker