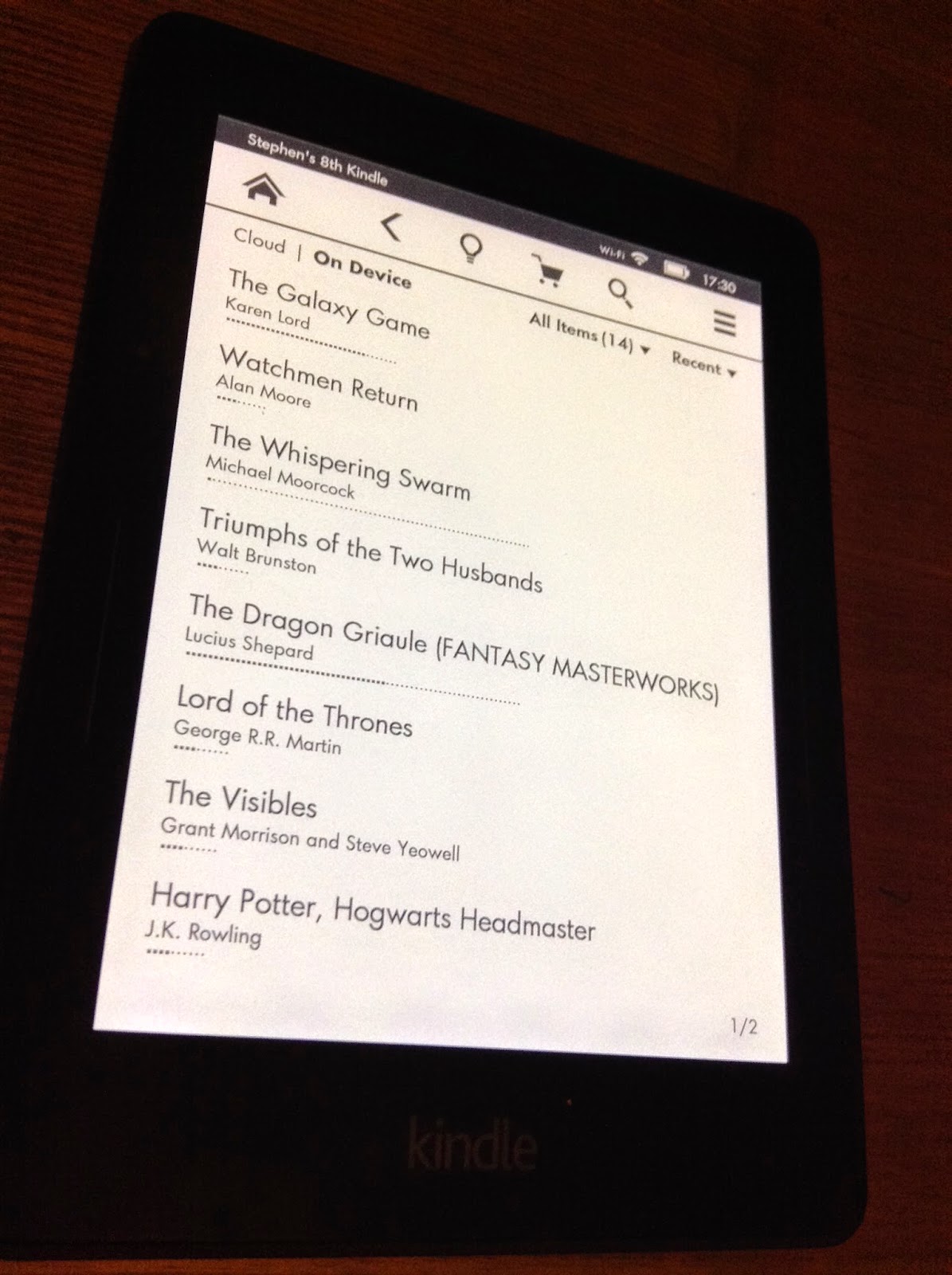 I didn’t buy a Kindle Voyage right away. The initial reviews weren’t good, and those that were seemed to come from tech reviewers who didn’t give the impression that they would be using the things for reading anyway. The Kindle Paperwhite had been a huge disappointment to me. The touch screen worked better than the touchscreens on any other ebook readers I had, and made it a device you could hold in lots of different positions, but the name was an outright lie, the e-ink screen no whiter than that of the earlier grey Kindle with a keyboard. The backlight didn’t make it look paper white, it was a ghastly green, and could never be completely turned off.

And yet I used it a lot, because our house is fairly dim, even in daylight, and once I had an ebook reader with a backlight there was no way Mrs Theaker was going to let me have a bedside lamp on at night.

That made me keen for a replacement, but distrustful of marketing promises. I wanted to see one in action in a Waterstone’s before buying, but the Kindle table in our local branch has now been colonised by gift books. I might have gone without buying one at all if it hadn’t been for the recent Fire Phone offer, which I went for, then cancelled, leaving me with a bad case of emptor interruptus.

When it arrived, my first impression was that the Voyage is essentially an upgraded – fixed – Paperwhite. Both children upon seeing it asked, “What’s the difference?” The screen itself, when the backlight is off, is practically indistinguishable from the Paperwhite’s. The increase in resolution is difficult to spot – although comparing it to my very first Kindle, the big white one that had to be sent from the USA, the improvement is clear: the text on that one now looks fuzzy. There are no new fonts, sizes or margin settings in addition to those on the Paperwhite, except when reading pdfs, where you can now choose to slightly increase the margins.

With the backlight on, though, the improvement from the Paperwhite is obvious. The light is much more even, much nicer to look at; it glows rather than ghosts. I think we are supposed to keep the light of this one on all the time, since a new setting of Auto Brightness lets the device choose its own brightness over the course of the day. It likes itself rather brighter than I like it, and its fluctuations are often puzzling, but the effort is welcome. I’m torn between appreciating the light and regarding it as a cheat, an admission that these e-ink screens have reached their technical limits and are never going to become as white as the pages of a book.

However, the more I use the Kindle Voyage – and I’m using it a lot, my Paperwhite passed on without even a kiss goodbye – the more I come to appreciate its small improvements on its predecessor. It doesn’t have buttons for turning the page, but instead has a quartet of pressure sensors, two on each side. Two are a few centimetres long, for moving on to the next page, two are mere dots, for going back – the latter are very difficult to find when reading in the dark at night. These can all be set to issue a tiny feedback thud when pressed. The result is the most immersive reading experience I have ever had, being able to go from one page to the next with the slightest squeeze of the thumb. Even when reading in positions that make the sensors hard to reach – or reading in landscape mode, where for some reason they don’t work – the Voyage improves upon the Paperwhite. Its screen is flush with the sides of the device, making touchscreen swipes simpler, more effective, and less irksome when reading for long periods.

There are other slight changes. All progress info, when displayed, now appears on the bottom left. When opening a new book from the Kindle store, a new About the Book panel appears, providing info about the book and any series of which it is a part, and letting you know how long it generally takes people to read it. The power button is on the back rather than the bottom, which is handier. The device gets quite cold outdoors. It’s a bit lighter than the Paperwhite, and to enhance that I’ve made a conscious decision not to buy a case for it, because once the Paperwhite went into its excellent case it never really came out of it. I’ve gone back to the simple sleeve that came with the original Sony Reader.

Overall, then, I’m surprised by how much I like the Voyage, though its improvements over the Paperwhite are so hard to spot. It just fixes everything that needed fixing, and is very pleasant to read. If you’d told me when I bought that original Sony Reader that the top of the range ereader so many years later would see so few major improvements I’d have been surprised. Still no colour, pages still grey, battery power barely improved, music and audiobook playback lost… I’ll read dozens if not hundreds of books on this device, but it’ll take something special to make me buy another. (He says, knowing in his heart it isn't true.) ****
Posted by Stephen Theaker