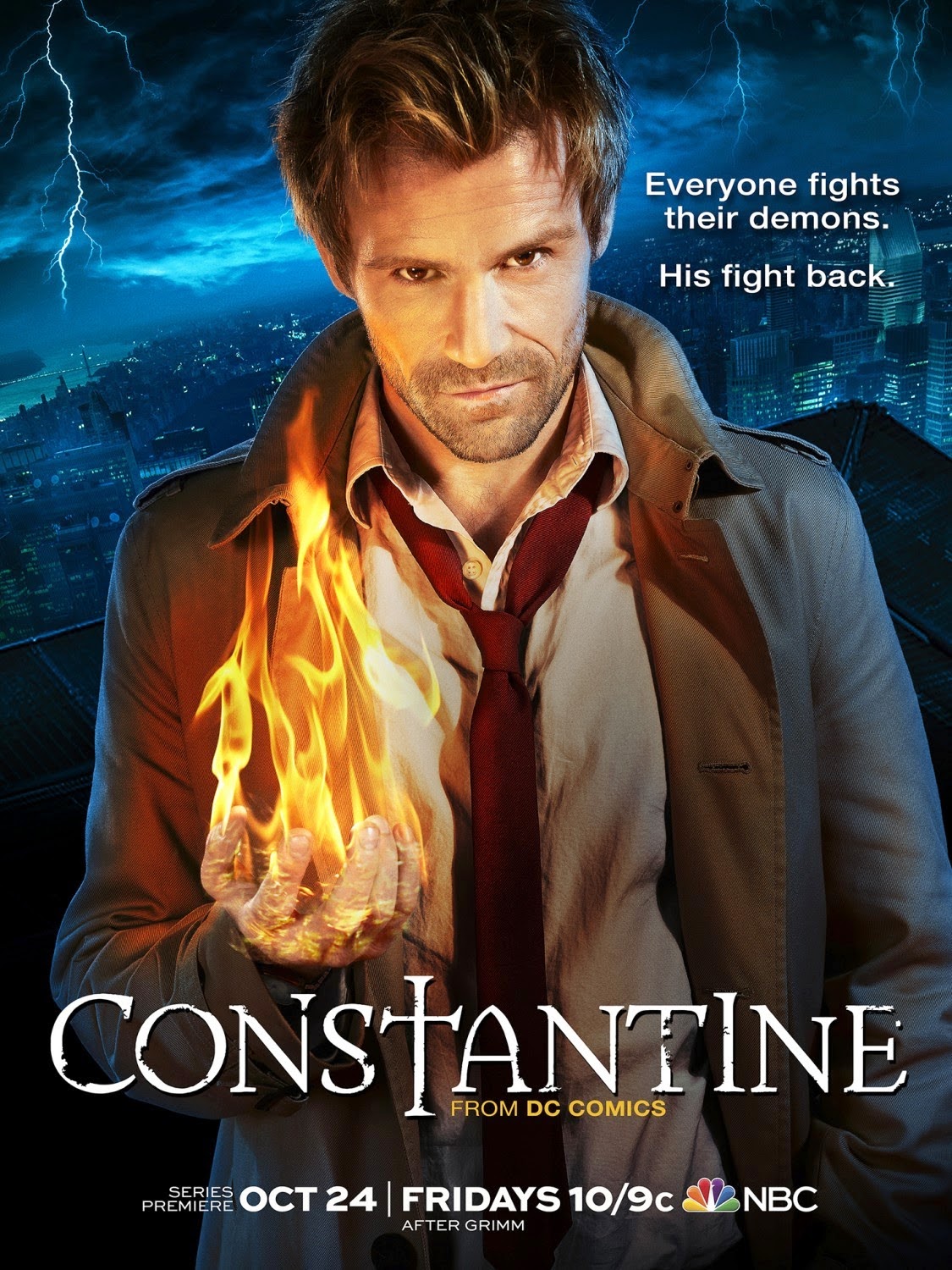 John Constantine is an English magician, exorcist and supernatural con man who at the beginning of the series is still an inmate at Ravenscar, an American institution for the mentally unwell, following the unsuccessful exorcism of a little girl in Newcastle. As Constantine, Season 1 (and possibly the only season) continues, we meet others who were there that day and see what a state it left them in.

A supernatural visitation makes John realise that he must get back to work, and on the outside he soon hooks up with Zed, a weirdly-accented psychic on the run from a religious cult. With the help of hard-to-kill cabbie Chas and the advice of an angel, Manny, they must combat the rising tide of darkness. Monsters and demons are abroad, and their powers are waxing. (DC fans will be intrigued to see Eclipso among them.) They will find allies, like the pre-Spectre Jim Corrigan, though not all will survive the experience.

I wanted to like Constantine much more than I did. I’ve been waiting on tenterhooks for a TV series based on the comic Hellblazer ever since I saw the possibility floated in SFX #1. It is a natural fit for television, with so many meaty story arcs to exploit, a compelling central character who doesn’t need expensive special effects to get the job done, and relative novelty – it hasn’t been adapted to death already, the one film so distant from the source material that if it weren’t for the title no one would connect it to this.

Part of the problem is that it is so networky. It has that feel. John has a little gang around him all the time like a security blanket, and he has a nicely furnished base from which to work. Constantine isn’t the kind of guy to have a headquarters and regular colleagues, but that seems to be what you need for a network show. Giving him Zed to chat with makes sense, since it gives him an audience for the kind of speeches that in the comics would appear in voiceover captions, but he needs to be more exposed than this, more vulnerable.

Matt Ryan’s performance as Constantine is spot-on, though. It is eerie to see a fictional character brought so perfectly to life, although because he’s nearly always with his friends, he’s always performing, always on; it would be good, if the show continues, to see more quiet moments, more of what he’s like when he doesn’t have to convince anyone of anything. He is not yet seeing the ghosts of those who have died for him, but one feels it is coming.

The storylines draw from all over the character’s history. There are elements of Alan Moore’s Swamp Thing (albeit without Swamp Thing himself, as yet), much from Jamie Delano’s run on Hellblazer, and nods in the direction of Garth Ennis’s issues. The American setting – and the American Chas! – takes a bit of getting used to. Of course, that’s where Constantine first showed up in Swamp Thing, but a UK setting, even if it was just for an episode or two, would have gone an awfully long way towards giving the programme its own feel. At least Constantine himself is English, which is an improvement on the film.

Ryan’s performance isn’t the only thing to enjoy. The title sequence and theme music are excellent, and that’s half the battle with any programme. As DC characters crop up there are signs that this could become the supernatural equivalent of Arrow. It wouldn’t be a surprise to hear that the question of its renewal or cancellation rests in part on whether the creators can negotiate for the appearance of other DC characters – a second season featuring the Sandman or Swamp Thing or Etrigan the Demon would be hard to resist.

The best episodes are genuinely frightening, and none are truly terrible. I enjoyed it much more than Grimm, though it hasn’t yet found its feet. I hope there will be a second season, but if there isn’t I’ll be disappointed rather than gutted. As it accumulates characters, and as those characters build a history, the stories gain weight, and eventually that could lead to this becoming a fantastic programme. The problem with a thirteen episode run is that it puts you in mind of how much better it could have been on a US cable channel or the BBC. And why the heck didn’t they call it Hellblazer? It’s a much better name. ***
Posted by Stephen Theaker