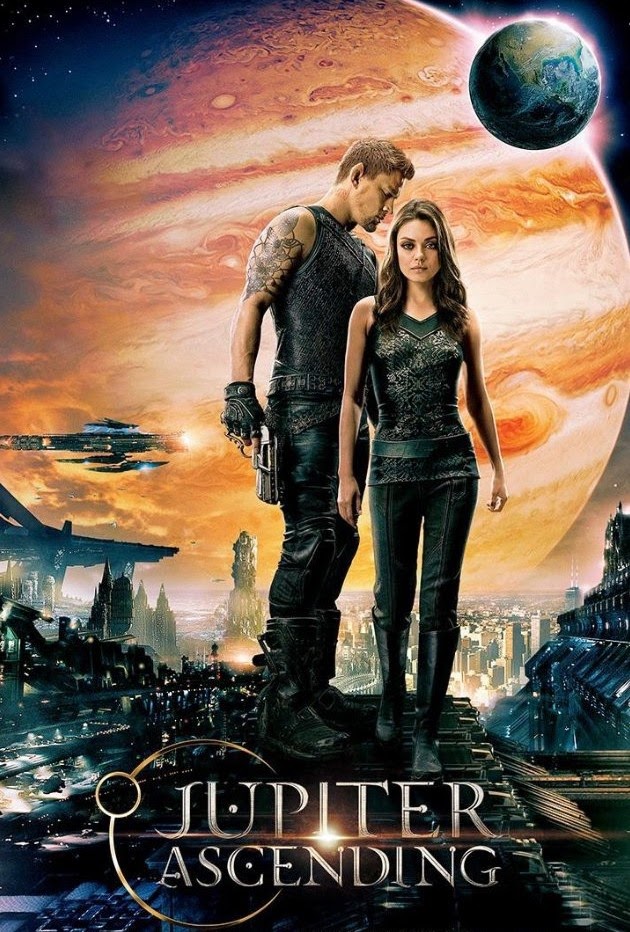 Jupiter Ascending is another visually stimulating movie from the Wachowskis, directors of such outstandingly pretty films as The Matrix, Speed Racer and Cloud Atlas. Mila Kunis plays Jupiter Jones, whose stargazing father died trying to stop robbers taking his telescope. She works as a cleaner with her mother and aunt, and they all live with her uncle’s family, which includes a shady cousin who persuades her to sell her eggs for money.

But the doctors aren’t after her eggs; they are sneaky little aliens in disguise, with orders to put her to death once her identity is confirmed. Luckily for Jupiter, just as she begins to lose consciousness a beefy guy with rocket boots enters the theatre, blasts the aliens, and carries her away: Channing Tatum, who spends much of the movie topless and glistening – for that alone this film will find many enthusiastic fans.

He plays Caine Wise, a splice of man and wolf, a flying soldier who had his wings clipped after chomping on the throat of an Entitled: one of the posh nobs who keep themselves young and beautiful by means of a regular “harvest”. Caine is now working as a hunter, a mercenary, but he begins to develop feelings for Jupiter. There is no future in their relationship – she doesn’t know it yet, but she is Entitled too.

After a spectacular battle among the skyscrapers of Chicago, he takes her to meet former colleague-in-arms Stinger Apini, played by Sean Bean, a human spliced with a bee, who lives in a house that’s part hive. Another battle later and Jupiter and Caine are off into space, where the film’s unusual structure will see her meet each of her three space children in turn. Well, they’re kind of her children. Everyone is after her because she has all the same genes in all the same order as their mother, a grand matriarch of the Entitled, who in her will left the planet Earth to any recurrence of herself. (What foresight!)

None of the matriarch’s children are particularly happy about her return, and as she passes through their hands Wise does his best to keep her safe, with the help of the Aegis, the space police, led by Captain Tsingh (played by Nikki Amuka-Bird, betrayer of Luther!) and the brilliantly named Phylo Percadium (Ramon Tikaram). Eddie Redmayne plays the most vicious of the three siblings, Balem Abrasax, spitting out his dialogue like Jeremy Irons with clothes pegs on his nipples. Before it’s all done there will be space battles, fights with flying dinosaurs, last minute rescues, and romantic kisses in the midst of glorious explosions.

Any film with space police is off to a flying start with me, and Jupiter Ascending has so much more to offer than that. It is a beautiful, stylish film from start to finish, with special effects the equal of anything in Guardians of the Galaxy and locations so gorgeous Elrond would be envious. Wise’s airskates are wonderful: it’s great fun to watch him scoot around a castle or jump out of a crashing spaceship and slide down the side of a building. Some elements of the story are extremely similar to Jodorowsky’s Megalex (see #50) and it does feel more like a French album than traditional American sf.

It could perhaps have done with being a bit funnier. What jokes there are tend to be underplayed. In the run-up to its release a lot of talk was about how daft it would be, thanks to Channing Tatum in elfish ears, but for me it could have safely gone much campier without going too far. Its locations and attention to detail may outshine Flash Gordon and The Fifth Element but it seems too anxious to avoid the giddiness and goofiness of those films, at least until its final, exhilarating scene.

I enjoyed Jupiter Ascending; it’s by no means the hot mess some people expected, but neither is it the instant classic I was hoping for – though the Wachowskis’ films do tend to grow on me. It took reading The Art of the Matrix for me to really appreciate that movie, and The Matrix Reloaded is now one of my favourite ever films, and would be for the highway sequence alone. Jupiter Ascending is a good film that looked fabulous, I can say that much for sure, and it’s a shame that sequels now seem unlikely. How much fun it would be to watch Jupiter and Caine fight side by side. ***
Posted by Stephen Theaker