Half a King by Joe Abercrombie | review by Stephen Theaker 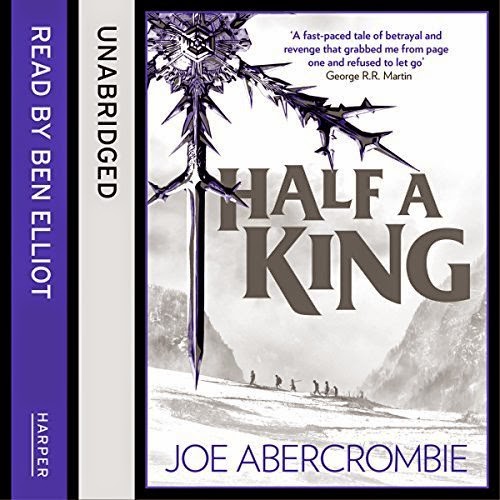 Young Yarvi becomes king after his father and brother are killed. He was born with one bad hand, and is no great shakes as a swordsman. He hasn’t even practised it for years – he was in training instead to become his brother’s adviser. He doesn’t fit the mould of a great warrior king, and on a raid to punish the supposed murderers, unhappy at the resulting carnage, he is himself betrayed. He survives, only to become a slave among strangers, an oarsman on a trading boat captained by a fabulous grotesque who constantly chides herself for her soft heart. Will his knowledge and cleverness be enough to keep him alive in a violent world? And if he can stay alive, can he get his vengeance? What compromises and sacrifices is he willing to make?

This is Half a King (Harper Audio, digital audiobook, 9 hrs 26 mins), an audiobook written by Joe Abercrombie and read by Ben Elliott. The reading is good, though after hearing Steven Pacey’s work on other books by Joe Abercrombie you can’t help missing it here. It’s much shorter than some of the author’s other novels; the audiobook of The Heroes lasts twenty-three hours. That the book sticks with Yarvi’s point of view makes it perfect for audio, because it’s always easy to pick up where you are. It’s not a work of great originality, but it’s well done, and I enjoyed it, and people who have enjoyed this kind of story before will probably enjoy it once again. It will go down a storm in school libraries.

It asks interesting questions about the workings of its own plot, the things we might take for granted: that the deposed king must fight his way back to power, and that we should support him as he does. Yarvi’s actions could cause the deaths of his own people, and in the end, for what? That he should be king instead of someone else? Really, it’s revenge, he’s made a vow, and there’s a strong sense that everyone else would have been better off if he hadn’t. The plot is very well worked, with motivations clicking into place at the end. The twists are excellent, and even if this was planned as the first of a trilogy it works well as a standalone novel; little is left up in the air except the pleasant possibility of future conflicts and revenges. ***
Posted by Stephen Theaker