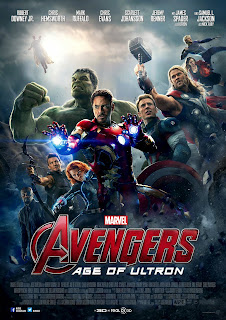 Our beloved heroes are back to decimate evil, attack our pocketbooks, decrease our IQ, and lavish us with non-stop action.

Avengers: Age of Ultron pumps up the adrenaline of the box office record-breaking Avengers Assemble (2012). The sequel stands as a treatise on the values of friendship and loyalty, as well as a commentary on the redemptive qualities of humanity. Plus it has lots of explosions.

Tony Stark (i.e. Iron Man) has a plan to bring peace to Earth through an artificial intelligence called Ultron. However, Ultron’s motives (and his take on humans) are a tad less charitable: he wants to destroy humanity. So Ultron makes himself a robotic body, enlists a couple of genetically modified twins (“He’s fast, she’s weird.”), and multiplies his army like “a Catholic rabbit” (Nick Fury’s words).

Despite all the biotechnological gobbledygook that passes between Stark and Dr Bruce Banner (the Hulk), the crew has a simple goal: stop Ultron. No matter our willingness to admit it, the reason we adults go to see these films is the same as that of the little boy: to see good guys trounce bad guys. And that’s what we get.

Though it’s penned by return director Joss Whedon, Avengers: Age of Ultron seems to have come together via a think tank of top advertising creatives intent on achieving a two-plus hour Super Bowl commercial. From the opening snowy battle scene to the rollicking conclusion, the film keeps the viewer hypnotized with its rock star cast and cartoonish fight sequences.

In this film, plot is peripheral to action. It’s best viewed on a big screen. A robot-propelled semitrailer floating above New York just isn’t the same on a small screen.

According to the National Center for Biotechnology Information, the attention span of the average American dropped 33% between 2000 and 2013. We’re at about eight seconds. The makers of Avengers: Age of Ultron got the memo.

Something for Everyone
The film appeals to many different ages and cinematic tastes.

Those who like humour are in for a treat. It’s hard to watch the film for longer than two minutes without finding something to at least chuckle at. It starts when Captain America reprimands Stark after he utters the film’s first word: “Shit.” Soon “Cap” lets slip a dirty word of his own. This becomes an ongoing joke.

The sense of boyish one-upmanship that permeates the film is best encapsulated at a party near the beginning. Thor and Iron Man strive to outbrag each other regarding the accomplishments of their women, Jane Foster and Pepper Potts. The heroes then engage in a strength contest by attempting to lift Mjölnir, Thor’s magical hammer. To top it off, Thor enhances the libations with some kind of magical elixir.

For romantics, there’s the blossoming relationship between Natasha Romanoff (i.e. Black Widow) and Bruce Banner. It’s particularly enjoyable to watch Mark Ruffalo’s reluctant, nearly submissive Banner squirm as Scarlett Johansson’s character makes clear her interest in him. Sure, Banner is concerned that his green alter ego could tear apart Romanoff, but he’s also contending with a much more incredulous possibility: that this vixen is actually interested in him despite his supreme nerdiness. Well played by Ruffalo.

For the youngster, especially the hysterical boy who likes to knock things down, Avengers: Age of Ultron is a dream come true. Colourful costumes. Robots. Weapons. Razed buildings. Standouts include Captain America’s completely unnecessary, though enthralling flips and Stark in a souped-up Iron Man getup attempting to stop a mentally altered Hulk’s – was it possible for him to get any angrier? – urban rampage.

The film achieves the ultimate in bombastic heroism when the Avengers, positioned in a circle, fight their adversaries as the camera moves around them in slow motion. Absurd. Juvenile. Love it!

Ultron – a Narcissistic Robot with Spunk
The villain that graces millions of bags of chips and cans of soda had better be as bad and as tantalizing as the products he touts. Ultron has the crunch and the fizz.

This bad guy combines the appearance of a more agile Terminator robot, the vocal distinctiveness of Heath Ledger’s Joker (The Dark Knight), and the tangential gems of Christian Bale’s Patrick Bateman (American Psycho).

James Spader’s voiceover shifts from philosophical ennui, to wisecracking commentaries on human frailties (e.g. “Everyone creates the thing they dread… People create… smaller people? Uhh… children! Lost the word there.”), to enraged disbelief at others questioning his superiority.

Get ready for a super-sized portion of crackling quotes from this one. After Steve Rogers/Captain America’s declaration that there is a way to achieve peace, Ultron says, “I can’t actually throw up in my mouth, but if I could I would do it!”

Read Douglas’s review of The Avengers.