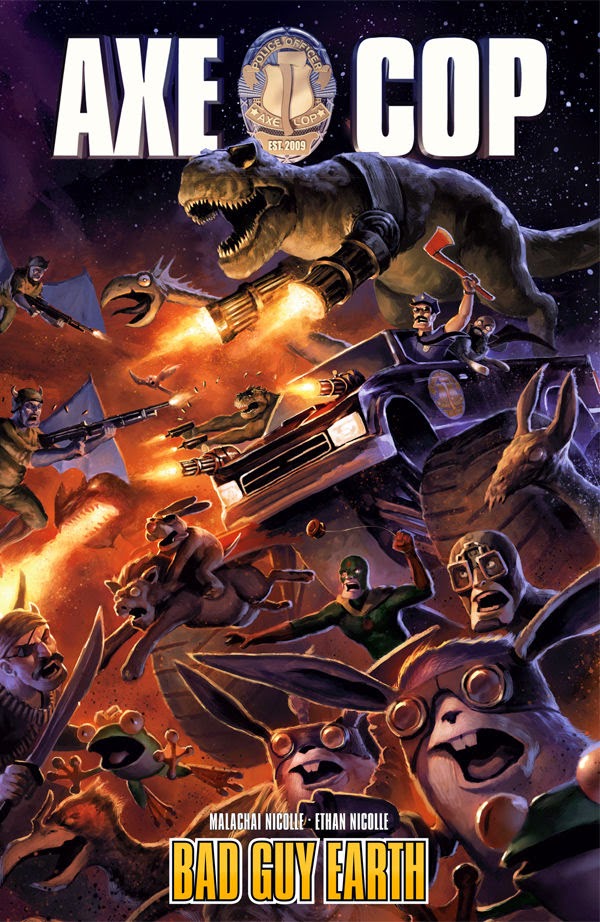 Axe Cop, Vol 2: Bad Guy Earth (Dark Horse Comics), by Malachai Nicolle and Ethan Nicolle. Nothing could ever be quite as hilarious as Axe Cop, Vol. 1, which made me laugh so much the sides of my eyes were sore for days from wiping away the tears, and this isn’t, but it comes pretty close. Axe Cop and friends have to battle two psychic bad guys who want to turn everyone on Earth into bad guys. Written by a little kid and drawn by his grown-up brother, this does a great job of harnessing the imaginative fireworks that go off whenever children start to rattle off stories. ****

Baltimore, Vol. 2: The Curse Bells (Dark Horse Books) by Mike Mignola, Christopher Golden and Ben Stenbeck. A story in five chapters, which begins with a betrayal in Lucerne. Baltimore searches for the vampire Haigus, who he first encountered on the bloodstained fields of World War One. ***

Be a Sex-Writing Strumpet (self-published) by Stacia Kane. Reading this didn’t half make me blush. It compiles a series of blog posts on the subject of writing sex scenes, principally for erotic novels. I don’t often include that stuff in my writing, but I’d read some sensible blog posts on responding to reviews by the author and wanted to buy something of hers. And it was useful to me: much of what she says can be applied to other kinds of action. It’s good, though some readers may feel it could have used a rewrite to make it more bookish and less bloggy. ***

Billy’s Book (PS Publishing) by Terry Bisson. A short PS Publishing collection of deliberately fragmentary and repetitive stories about a boy who has odd stuff turn up at his house, like giant ants and wizards and unicorns. They’re okay, but it was a bit of a surprise at the end to see what starry venues they had originally appeared in. ***

Black and Brown Planets: The Politics of Race in Science Fiction (University Press of Mississippi), by Isiah Lavender III (ed.). Interesting book of essays. Two about one episode of Star Trek: Deep Space 9 are maybe a bit much, and given the title it seems odd that it doesn’t cover India, the country that might well come to lead the space race (the “Brown” section is more about South America), but I learnt a lot from it. Like any book of literary criticism, it can be dull, but that’s outweighed by the issues, authors and stories it works so carefully to bring to our attention. A few essays make great claims without much evidence, but all provide much to think about; it opens up the conversation, rather than having the last word. Walter Mosley is quoted inside as saying: “The power of science fiction is that it can tear down the walls and windows, the artifice and laws by changing the logic, empowering the disenfranchised or simply by asking, What if?” Black and Brown Planets shows how writers and critics are doing just that. Reviewed in full for Interzone #255. ****

Black Science, Vol. 1: How to Fall Forever (Image Comics), by Rick Remender, Matteo Scalera, Dean White. Begins with a pair of scientists dashing through a bizarre alien world, desperate to get back to the children who will die if they don’t get back in time. As the story goes on, it begins to feel a bit like Sliders or Primeval, one of those shows where characters pitch up in a place and have to get out again. It’s better than either of those so far, let’s hope that continues. The art is spectacular. ***
Posted by Stephen Theaker