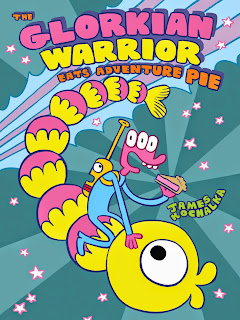 In that one the Warrior took up the quest to deliver a pizza, as requested by someone who had apparently dialled the wrong number – along the way they became friends with Gonk and a brain-sucking baby alien. The second graphic novel in the series, The Glorkian Warrior Eats Adventure Pie (First: Second, hb, 128pp) is as funny and inventive as the first.

In this book they meet Buster Glark, a hiccup-happy jerk with his own super backpack who interferes with their mission: to kill a space snake that destroys pie factories. Later the Glorkian Warrior decides to let his elbow do the thinking while they rearrange the furniture, Gonk comes on Glork Patrol with the phone tied on as his backpack, and the baby alien goes too far in his brain-sucking.

The book is written, drawn, lettered and coloured by James Kochalka, whose glee and silliness is a perfect fit for children’s books. I’m not generally one for literary exegesis, but this feels like it grew out of a day James Kochalka spent goofing around with his own children (“Happy family”, “No share no fair!”), and reading it makes you part of the fun.

It’s bright and attractive enough to appeal to younger kids, with big clear speech balloons where the words are given plenty of space, and it’s eminently re-readable – which I know because I read it again and laughed again while writing this review. Trumping plays a big role, and jokes about that never get old. A joyful read for adults and a perfect book for children, even the most reluctant of readers. Every school should have a copy. ****
Posted by Stephen Theaker