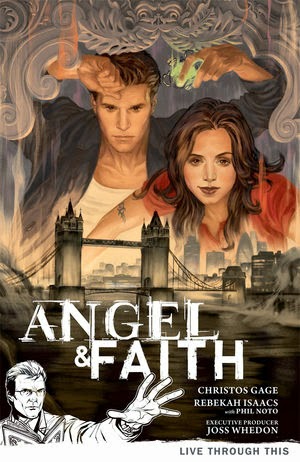 Adventure Time, Vol. 2: Pixel Princesses (KaBOOM!), by Danielle Corsetto and Zack Sterling. Another black and white graphic novel, this time featuring several of the princesses as they get stuck inside their computer pal. Bought for the children (possibly by the children with their pocket money) but I enjoyed it too. ***

Afterlife with Archie, Vol. 1: Escape from Riverdale (Archie Comics), by Roberto Aguirre-Sacasa and Francesco Francavilla. Interesting alternative take on the gang. Shows real understanding of the characters. Doesn’t have a proper ending. ***

Amazing Screw-On Head and Other Curious Objects (Dark Horse Comics), by Mike Mignola and Dave Stewart. Collecting weird tales by Hellboy creator Mike Mignola. The lead story is about a head who can screw himself into various bodies, and does so in order to help the President, Abraham Lincoln. ****

Amelia Cole and the Unknown World (Monkeybrain Comics), by Adam P. Knave, D.J. Kirkbride and Nick Brokenshire. Book one in a well-drawn and readable series about a young woman who can do magic. ***

Angel and Faith, Vol. 1: Live Through This (Dark Horse Books) by Christos Gage, Scott Allie, Rebekah Isaacs and Phil Noto. Vampire with a soul Angel did some stuff recently that he feels bad about, and he’s trying to put things right. Naughty vampire slayer Faith owes him one from back in the day so she’ll stick by his side, even though she thinks he’s making a mistake. The first story sees them tracking down the source of an elixir of life, and the second brings back Harmony, still the world’s most famous celebrity vampire. Enjoyable without being essential; I think Angel and Faith are both characters who benefit from a bit of offscreen time. Watch out for the spoiler for volume two in the artist’s notes at the back. ***

Asterix and the Magic Carpet (Orion), by Albert Uderzo. Asterix goes to India, in theory. It seems more like Arabia. ***

Asterix in Corsica (Orion), by René Goscinny and Albert Uderzo. Not the best in the series. ***

Asterix in Switzerland (Orion), by René Goscinny and Albert Uderzo. Very funny. Reminded me why I loved Asterix so much as a youngster. ****

Avengers Assemble (Marvel) by Brian Michael Bendis and Mark Bagley. Collecting a blockbuster mini-series where the Avengers team up with the Guardians of the Galaxy to take on Thanos, who’s got his hands on a new cosmic cube and an army of Badoon. It’s not too bad, and the artwork is good, but the story struggles to fill eight issues and Gamora wears an appallingly sexist outfit that looks like Borat’s swimming costume. ***
Posted by Stephen Theaker