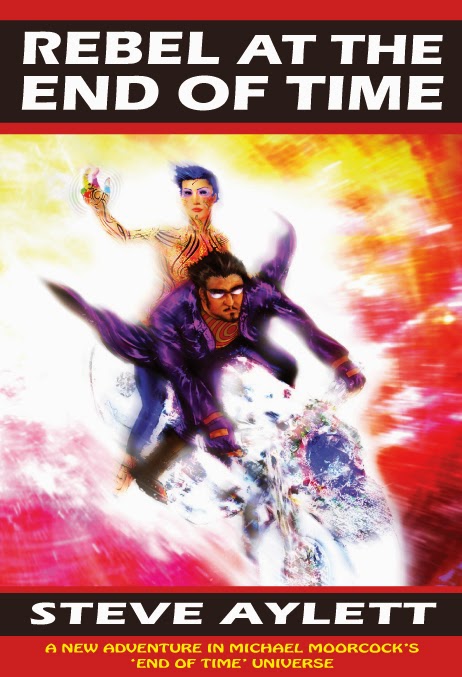 Magnus Robot Fighter Archive, Vol. 2 (Dark Horse Comics), by Russ Manning and Philip Simon. Collection of old comics about a guy with super-strength who battles robots who go bad, and when necessary the people who control them. Notable for Russ Manning’s art and the way the bad robots shout “Squeee!” when he knocks off their heads. ***

Nemo: The Roses of Berlin (Top Shelf Productions), by Alan Moore and Kevin O’Neill. These short Nemo books in the world of the League of Extraordinary Gentlemen are instant purchases for me. This one brings in characters from Metropolis and The Great Dictator. ****

Of Whimsies & Noubles (PS Publishing), by Matthew Hughes. Another fabulous Luff Imbry novella. In this one he is apprehended and sent to a prison world. ****

Planet of the Apes, Vol. 1: The Long War (BOOM! Studios), by Daryl Gregory. Set in the continuity (if you can call it that) of the original film series, this was okay but not much fun. ***

Rat Queens, Vol. 1: Sass & Sorcery (Image Comics), by Kurtis J. Wiebe and Roc Upchurch. Funny comic about a group of adventurers whose world is modelled after our world’s roleplaying games. ****

Rebel at the End of Time (PS Publishing), by Steve Aylett and Michael Moorcock. A short novel which throws Leo Del Toro, a 21st century Che Guevera, into the bewildering world of Michael Moorcock’s brilliant Dancers at the End of Time trilogy, where he must battle his despair among people for whom action is meaningless, novelty everything. The difficulty of reading the story comes from the misunderstandings of the people of the future, which leads to surprises in every sentence. Aylett’s story is a great addition to the End of Time, in that it shows us (or speculates on) how a different type of protagonist would handle it. The great man himself Michael Moorcock contributes a twenty-page story to the book, “Sumptuous Dress”, which comes close to causing a meltdown in the space-time continuum by crossing the end of time with the equally confusing Second Ether, producing more bafflement than most readers will be able to bear in a single story ****

Secret Lives (Cheeky Frawg Books), by Jeff VanderMeer. A series of stories written for and about the people who bought the special edition of one of the author’s other books. Not at all as throwaway as their provenance might lead you to expect; some stories are downright excellent. ***

Showcase Presents: Superman Family, Vol. 3 (DC Comics) by Otto Binder, Robert Bernstein, Curt Swan, Stan Kaye, Ray Burnley, Kurt Schaffenberger, Wayne Boring, Dick Sprang, John Forte, Creig Flessel and Al Plastino. I could barely read a page of this without thinking, what the hell, Superman? The description of Descartes’ evil demon fits him perfectly: “as clever and deceitful as he is powerful, who has directed his entire effort to misleading [Lois and Jimmy]”. Here are just a few examples. In “Lois Lane’s Super-Perfume” he proposes marriage to Lois – and then takes it back. It was a ruse to trap some swindlers! In “Three Nights at the Fortress of Solitude” he uses a robot to spank her so hard she can’t sit down the next day! And in “The Cry-Baby of Metropolis” he lets her go through the terror of reverting to a baby while pretending he doesn’t know she’s the baby, to teach her a lesson about inquisitiveness! Sometimes he’s astonishingly reckless: in “The Shocking Secret of Lois Lane” he throws two drill-saws at her head to remove a box she’s using as a mask! It’s so sexist: in “Lois Lane’s Signal Watch” Superman gives her an emergency watch just like Jimmy Olsen’s. She summons the Man of Steel to unstick the zipper on her purse… ***

Sin City, Vol. 3: The Big Fat Kill (Dark Horse Comics), by Frank Miller. The last book I read by Frank Miller was so bad that I’d almost forgotten how good he can be. ****

Star Trek: New Visions (IDW Publishing), by John Byrne. Photo-stories based on the original TV series. Not as much fun as expected. Lots of recapping. **
Posted by Stephen Theaker