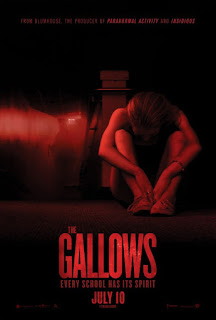 Recent critical response to mass market horror films (It Follows (2014) being the exception) has been abysmal. Last year, critics erred in bashing the thoroughly entertaining As Above, So Below. Once again, they’ve lambasted an engaging found footage film with a young adult cast. This time, it’s The Gallows, and once again, they got it wrong.

The Gallows, directed by Travis Cluff and Chris Lofing, traps four Nebraskan students in a haunted high school performing arts center. It keeps the viewer locked in from the appalling accident in the first scene until the final twist. At the end of the 81-minute film, I felt as if I’d downed a couple of energy drinks.

Reese has quit his high school football team to pursue the performing arts. His decision is driven solely by his secret crush on Pfeifer, whose acting (versus cheerleading) leanings make her forbidden by Reese’s ex-teammate and friend Ryan Shoos. Somehow, Reese has been cast in the male lead – he’s a terrible actor – beside Pfeifer in a play that bears the same title of this film.

But there is a far more dangerous threat to Reese: twenty years earlier, Charlie Grimille, slated to play the executioner in the same play, had to step in as the lead. A freak accident during a performance killed Charlie, who is rumoured to haunt the facility.

The loquacious Ryan convinces Reese that the way to avoid bombing his performance (and disappointing Pfeifer) is by destroying the set. Then Reese can swoop in and aid the ailing Pfeifer. So the two young men, accompanied by Reese’s snarky girlfriend Cassidy, sneak into the theatre at night, where they encounter Pfeifer. The foursome gets locked in, and thus begins their increasingly horrific escapade.

If you’re a “that could never happen” kind of person, perhaps this isn’t the film for you. For instance, you’ll have to overlook the unlikelihood that a school would repeat the same ill-fated play twenty years later (hey, I didn’t say this film was perfect). However, if you can suspend disbelief and stop thinking for an hour and twenty minutes, then go see The Gallows. Squirm as the camera lingers on dark passageways, passes through creepy shop rooms, or zooms in on strange objects. Breathe faster amid the creaks and bangs, and feel the tension as an unseen presence grows closer.

If you’re willing to plunk down the $10 to $15 to see this film in a cinema with a superior audio-visual system, do it. It adds to the authenticity of scenes, such as that during which the camera view moves along wooden ceiling slats and the thump of footsteps grows louder. During that moment, you are there with those students.

One way this film stands apart from other recent found footage entries is the level of humour, mainly at the beginning. It’s driven largely by egocentric and uber-chatty lead cameraman Ryan. In the funniest scene, Ryan steps out from behind the camera, then tosses a football that knocks over a classmate he refers to as “Stage Boy”.