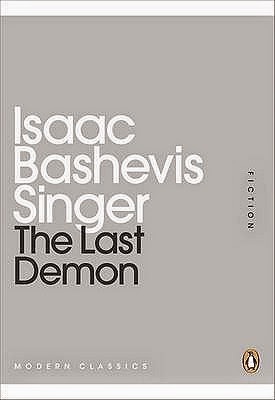 The Goon, Vol. 0: Rough Stuff (Dark Horse Comics), by Eric Powell. A mob enforcer is secretly also the mob boss, and his main rival is the leader of a zombie gang. These collect very early issues, from before Eric Powell was really happy with it, but it seemed pretty good to me. ***

The Goon, Vol. 1: Nothin’ But Misery (Dark Horse Comics), by Eric Powell and Robin Powell. More adventures of the Goon. It’s like a cartoonish, supernatural version of Sin City. ***

The Kosher Guide to Imaginary Animals (Cheeky Frawg Books), by Ann VanderMeer and Jeff VanderMeer. Brief but amusing book exploring whether various imaginary animals would be considered kosher or not, and how one might cook them. ***

The Last Demon (Penguin Books) by Isaac Bashevis Singer. Three excellent stories in a Penguin Mini Modern, two of them fantasy. “The Last Demon” is about a demon who relates his frustrating attempt to persuade a rabbi in the town of Tishevitz to sin. “Yentl the Yeshiva Boy” is about a girl who wants to study the Torah rather than get married and darn socks, and the trouble into which that leads her. “The Cafeteria” is about a troubled woman who survived the Holocaust but now sees Hitler alive on the streets of New York. *****

The Last Rakosh (self-published) by F. Paul Wilson. Jack, an experienced monster hunter, spots a dangerous creature at the circus: a rakosh, a cross between a gorilla and a shark. This one is weak, because it’s being kept in an iron cage and isn’t being fed properly. One hearty human supper later it becomes a real problem. I’d heard good things about the Repairman Jack series, but this story didn’t quite sell it to me. We don’t see what makes him or the series special. He seems to be a typical tough guy, and the story is told in a straightforward way. ***

The Many Adventures of Miranda Mercury: Time Runs Out (Archaia), by Brandon Thomas and Lee Ferguson. Space adventure. Enjoyable, but falls a bit short of its very high ambitions. ***

The Portent: Ashes (Dark Horse Books) by Peter Bergting. Warrior wood nymph Lin returns from the spirit realm to find much time has passed. Her wood has been razed to the ground, and the land is divided between three warring parties, two of whom she has a history with: her former mentors, a warrior wizard and a witch. Lovely art. ***

The Unquiet House (Jo Fletcher Books), by Alison Littlewood. A woman moves to a haunted house, and we travel back in time to find out who haunts it and why. Several terrifying scenes. Reviewed for Black Static #43. ***

The Very Best of Kate Elliott (Tachyon Publications) by Kate Elliott. Reviewed for Interzone #257; I enjoyed it a lot. I think it might be her complete short fiction rather than a selection of the best, but I wouldn’t have guessed from how good it all was. ****
Posted by Stephen Theaker