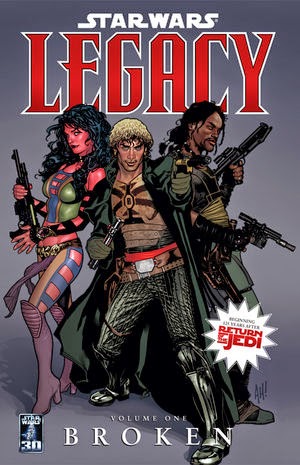 Star Wars Tales, Vol. 2 (Dark Horse Books) by Dave Land (ed.). Enjoyable series of short stories set in all periods and places and plotholes of the Star Wars universe. The adventures of Luke’s severed hand and Darth Vader’s encounter in Cloud City with C3PO were highlights for me, but it’s all pretty good. Shame that Dark Horse have lost the license, it looks like they were making the most of it. ***

Star Wars Tales, Vol. 3 (Dark Horse Books) by Dave Land (ed.). Includes two strips written by Garth Ennis: how Han Solo won the Millenium Falcon from Lando Calrissian, and the life story of the first stormtrooper sent on to the rebel ship in Episode IV. My favourite strip was Jay Stephen’s “The Rebel Four”, Star Wars in the style of Jack Kirby. ***

Star Wars Tales, Vol. 5 (Dark Horse Books) by Dave Land (ed.). Best in the series so far, including a set of stories from indie comics creators like Tony Millionaire, Jason, Peter Bagge and Gilbert Hernandez. I could have gone for much, much more than four pages of James Kochalka’s “Milton Fett”, the useless younger cousin. ****

Star Wars: Crimson Empire (Dark Horse Books) by Mike Richardson, Randy Stradley, Paul Gulacy, P. Craig Russell, Konot, Sean and Dave Dorman. A surviving member of the Imperial Guard goes after a traitor, bringing him into a temporary alliance with the new republic. Follows on from other expanded universe stories where the Emperor was resurrected in clone bodies; a bit confusing if you don’t know that. It’s okay. ***

Star Wars: Darth Vader and the Ghost Prison (Dark Horse Books) by W. Haden Blackman, Randy Stradley, Agustan Alessio and Dave Wilkins. A very good story about Darth Vader, a young cadet and another bad guy protecting the Emperor after an attack on Coruscant by Imperial rebels, by taking him to recover in a forgotten prison established by the jedi to house the prisoners of war captured by one Anakin Skywalker. Makes you think a Darth Vader film would be a really good idea. ****

Star Wars: Legacy, Vol. 1: Broken (Dark Horse Books) by John Ostrander, Jan Duursema, Dan Parsons and Adam Hughes. Set a century or so into the future of the Star Wars universe, when the Sith once more rule the empire. The previous emperor, who wasn’t a Sith, plots his return to the throne. Cade Skywalker works as a bounty hunter, and he plans to turn in the former emperor’s feisty daughter. Decent, not amazing. A bit depressing to think the new republic will fall so quickly. ***

Star Wars: Tag & Bink Were Here (Dark Horse Books) by Kevin Rubio and friends. A Rosencrantz and Guildenstern in the Star Wars universe. Not quite as much fun or as clever as that sounds. ***

Steed and Mrs Peel, Vol. 2: The Secret History of Space (BOOM! Studios) by Yasmin Liang, Caleb Monroe and Will Sliney. Felt a bit straightforward after the wildness of the Grant Morrison volume. ***

Steed and Mrs Peel, Vol. 3: The Return of the Monster (BOOM! Studios) by Caleb Monroe and Yasmin Liang. Steed and Mrs Peel are faced with the return of an old foe from the TV series, at least I think so – I’ve only seen a handful of episodes. Readable without being remarkable. ***

Steed and Mrs. Peel: The Golden Game (BOOM! Studios), by Grant Morrison, Anne Caulfield and Ian Gibson. Liked it, but a problem with the colour separations made it difficult to read. ***

Suddenly, Zombies (self-published), by Amanda C. Davis. Quirky pair of short stories, one about zombies on a spaceship, the other about giant zombie gorillas. Cheap and cheerful. ***
Posted by Stephen Theaker