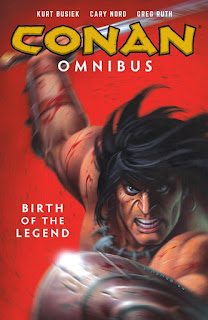 Conan is a burly, quick, strong and sharp fellow who wields a broadsword and wears a horned hat. He is a great thief, a great warrior, and eventually a leader of armies and a great king. He never gets the hang of magic, though, and over the years plays a pretty big part in ending its dominion over humanity. But that lies ahead. An unobtrusive framing device – a wazir reading tales of Conan to his prince in the distant future – takes us back to Conan’s birth, on the battlefield, after his pregnant mother Fialla rushes to help his father Conaldar. He is a month premature, but is still a very big baby. He already has a mean stare. To some extent, he is already the man he will grow up to be, even as a child. Rather than seeing him formed as he grows up, we see him revealed, through interactions with other children, adults, wild animals. He is as keen to learn as he is to fight. After bringing war upon his people, he leaves home, and then we see his first travels, with the traditional enemies of his people, and then being enslaved by the Hyperboreans.

This 456pp book collects issues 0 to 15, 23, 32, 45 and 46 of the monthly Conan series from Dark Horse. You can’t tell, however, which issue you are reading; a contents page would have been nice, or for issues to be separated by their original covers, or for artists to be credited for particular issues, but this format is standard for Dark Horse’s omnibus series, and probably appeals to people who just want the story without the apparatus. The artwork, by Greg Ruth for the early years, by Cary Nord and Thomas Yeates for the Hyperborean story, who are joined by Tom Mandrake for the third set of tales, is consistently magnificent. I’ve read that its distinctive visual style was produced by Dave Stewart and Greg Ruth applying the colour directly over pencils.


The book’s cover, by another artist altogether, undersells it, and led me to expect a glossier retread of the Marvel comics, but it’s meaty, smart, visceral and stylish. This is Conan at his best, not the lunkhead seen on the cover. He feels like a character, not just a fantasy. But it is a fantasy, of course, and there’s plenty of bedding beautiful women, none of whom seem to worry about getting pregnant. The lettering is worth a shout too, by Richard Starkings and Comicraft. There’s quite a lot of narration, and if that had appeared in a pseudo-handwritten font or (as in early issues of Savage Sword of Conan) something hard-to-read like thin white text on black backgrounds, it would have quickly become a chore. Instead, after the prologue, a typewriter font is used, as if the captions were torn from the manuscripts of Robert E. Howard. It’s easy to read and evocative of the pulps.


Dark Horse’s licence to publish Conan comics ends this year – if the rest is as good as this, they can look back on a job very well done. So frequently their licensed products don’t just live up to the source material, they outshine it. Much as I have loved what I’ve read of Marvel’s Conan the Barbarian and Savage Sword Sword of Conan, this is the best adaptation of Conan I’ve read. Volumes two to five are already available, with six and seven to follow later this year. Stephen Theaker ****