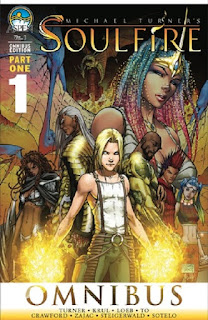 Mal is a teenage boy in the year 2211 who is, as he will find out, a chosen one, the bearer of a spirit that has moved through many lives in preparation for its ultimate destiny. A flying woman with black speech balloons comes to kill him, while another winged woman, Grace, comes to rescue him, and while a giant robot dragon attacks his home city Grace whisks him away, to meet mystics who can train him to use his powers, and then to other allies in their fight against the evil Rainier and his soldiers. He’s a bad guy who survived the end of the last age of magic by embracing technology, and now that magic is on the rise again he is ready to combine the two to ensure his dominance. Luckily Mal has a pair of excellent friends in Sonia and PJ, who have got his back in all this and are willing to follow him way out of their depth.

This is not the kind of comic I usually read, but I can rarely resist a five hundred page omnibus or a comics Humble Bundle and this combined both. It turned out to be a pleasant surprise, very much in the vein of the Final Fantasy games. It shares some contributors with Top Cow’s The Darkness, and there are plenty of pin-up pages of beautiful women, but it’s not as sleazy or grotesque as I found The Darkness to be (see TQF41 for the review). It would actually be fairly suitable for a young teen. The publisher Aspen is planning to add age ratings to their comics, which has provoked some dismay, but it’s possible that, rather that warning children off mature content, their goal is to alert school librarians and parents to the fact that they are publishing books that are suitable for children and that children would like.

It’s a simple story told quite well. The experienced Jeph Loeb writes the earlier issues, with J.T. Krul then taking over. Michael Turner draws most of Volume One (the first ten issues collected here), and gets a story credit on them, while Marcus To, whose appealing style suits the story a bit better, takes over on pencils for Volume Two (the next nine issues). It’s light, frothy nonsense, and I wouldn’t recommend it to our more serious readers, but it was a nice way to spend a few hours. It’s colourful and pretty: many scenes take place by the ocean, and the blues of the seas and the sky and the exotic locales give it something of a holiday feel. Like Laura Allred’s work on Madman, Beth Sotelo’s colours and effects in Volume Two are so good that they become a reason to read the comic in their own right. I loved Grace’s shimmering Star Trek teleporter hair. ***
Posted by Stephen Theaker