Cosmonauts of the Future, by Lewis Trondheim and Manu Larcenet (Europe Comics) | review by Stephen Theaker 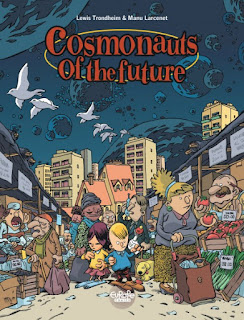 First of a three-album series, this album was originally published in French in 2000 on Dargaud’s Poisson Pilot label. This English translation followed in 2016. It’s about two awkward children who struggle to get on with their peers or their parents. The girl, Martina, thinks everyone is a robot, and has a habit of twisting the skin on people’s hands to see if they will pretend to scream to seem human. The boy, Gildas, a new arrival at school, thinks everyone is an alien, and he tells Martina that he is a a “highly-trained cosmonaut”. They have a begrudging go at being friends, stop talking when the other children make fun of their relationship, but eventually team up to investigate the world and discover which of them is right. This is a really sweet portrayal of a childhood friendship, with witty and perceptive dialogue, and cartoonish but effective and emotive art. Children will enjoy it very much, although parents should be warned that it shows the children lying to their parents and going secretly on a train ride to another town, and what’s more taking a little sister with them on this jaunt, not something one would want to encourage. There’s also a scene where the boy punches a little girl at school without any consequences, which might be enough to keep this out of primary school libraries. Happily, an extremely jarring event later in the book turns out to be less serious than it seems at first, and this takes the book in a new and interesting direction that places it more solidly in TQF territory. Recommended for adults as well as children. ****
Posted by Stephen Theaker