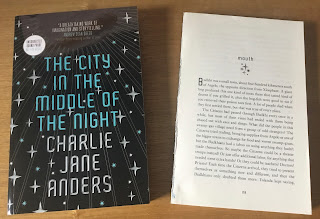 Here are my answers to the less urgent questions that the world has been asking this week.

I Know My Middle Name Is William.

What do you do with physical ARCs when you’ve read and reviewed them? – @meringutang

They mostly go in the recycling, once the review has been published and it looks like no one is going to demand I justify myself. Charity shops can't sell them and authors and publishers don't want unfinished versions of the book in circulation, especially when the literary scene is as judgmental and febrile as it has been in recent years, plus they'll be covered in my scribbled notes, highlights and foldings. I'll usually have broken the spines, and some I'll even have torn in half along the spine for more convenient reading (see photo). Finished books I'll pass on to friends or charity shops. But I've stopped accepting print copies for review now (except when assigned by Interzone), because it takes me so much longer to read them, so if all of that fills you with horror, rest assured I'm not doing it very often now.

If you are old enough to have played in an arcade, let’s say you have £20.00 of tokens in your pocket. What is the first game you ran to without hesitation? – Danny Deraney

Space Harrier. I loved the game and the chair moved around, but it was very expensive so I stuck to playing the brilliant ZX Spectrum version.

Who is your high school's most famous alumni? – Ben Upton

I wasn't aware of any, but I looked it up on Wikipedia and Captain Tom Moore, who raised all that money for the NHS, went there, a year or fifty before me. And Robert Westall was a teacher there! They never told us that when we were reading his books.

Kate Dickie especially is quite extraordinary as a Sleaford Mod [in this video]. She’s now on my list of who I’d want if I ever made a film. – Julie Travis

Making is a film is hard, so I'd want actors I could trust to have my back. Like Dave Bautista. I love how he stood up for and stood by James Gunn and rallied the rest of the Guardians of the Galaxy cast to do the same. Not all actors would have the guts to put their careers on the line like that, as we've seen this week. (Daniel Radcliffe would not be on my list.) Same for Scarlett Johansson, who has been forthright about working with Woody Allen because she thinks he is innocent (which on the evidence he does seem to be), while other actors distance themselves in an unforgivably cowardly way, even though they surely think he is innocent too – why else would they have been willing to work with him? And Jamie Bell. In the "making of" Jumper he's like, "Well, it's day 924 of the shoot and the director has decided to reshoot everything from scratch with an almost entirely new cast on a different continent," and he's still smiling and giving it everything.

Just Go With It, Jack and Jill, The Wedding Singer, The Master of Disguise, The Thing, Blade Runner, Star Wars, Star Trek II: The Wrath of Khan, The Voyage Home: Star Trek IV, Flash Gordon, The Thing, Superman II and III, Big Trouble in Little China, Return of the Living Dead, Poltergeist, Halloween, An American Werewolf in London. Weird that I could think of so many, because I don't generally like watching films twice.