Jeff Wayne’s The War of the Worlds: The Musical Drama, by H.G. Wells (Audible) | review by Stephen Theaker 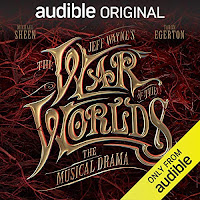 But once I began to listen to this version (adapted by Doreen Wayne, Richard Curtie and Bev Doyle), I came around very quickly. Because what could be better than a two-hour musical version of The War of the Worlds? A five-hour version! Starring Michael Sheen! He is, as ever, perfectly brilliant as the journalist, giving his voice here some rich, deep notes that make him sound rather like Tom Baker at times. Taron Egerton of Rocketman is good too, as the artilleryman.

Unfortunately neither of them get to sing. The music is instrumental, extended versions of the tracks from the original album. There are ull-ahs, of course. And some dubstep elements! There are great sound effects, and the whole effect is much more dramatic and less cheesy than I expected. Much more of the original story is included, and that the narrative follows the journalist’s wife Carrie (played by Anna-Marie Wayne) as well as the narrator is very welcome.

It’s all very well done, and I’ll be certain to listen to it more than once. What could possibly be better than a book you can dance to? Stephen Theaker *****