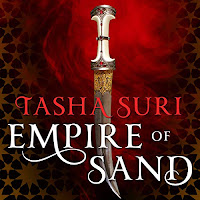 Mehr is the governor’s daughter, but she’s inherited the powers of her mother’s nomadic people. When the emperor’s chief mystic learns of her, she is coerced into an arranged marriage with an angry young man. This was one of the dullest books I’ve ever read or listened to, all rumination and repetition, every step in the story swaddled in endless bloviation. Soneela Nankani’s narration tries hard to rouse interest in the reader, but in doing so only emphasises how little of interest is happening in each sentence. I frequently found myself saying out loud in exasperation, “I know, you’ve already told us that!” That the novel won the British Fantasy Award for best newcomer, against much better books, genuinely makes me wonder whether the audiobook was based on an earlier version of the manuscript. Stephen Theaker **
Posted by Stephen Theaker