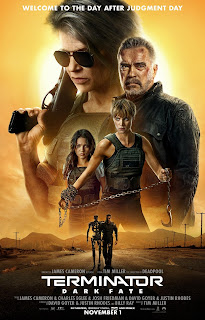 The future’s so grim, I don’t even wear shades.

I don’t write many reviews nowadays. I don’t see many films. I’m time poor and fully committed to sparing the world my verbiage from on high.

But then another Terminator movie comes along and – well, here I am, contemplating the inevitability of it all while staring at a cinema ticket that reads:

The truncation is apt. More than just evoking the globuled essence of a Rev-9 Terminator oozing back together, it speaks of a plot saturated with pointless action. It conjures the unhealthy craving for a worthy sequel to The Terminator and Terminator 2: Judgement Day.

Terminator: Dark Fate purports to be this film. It brings back Linda Hamilton. It relegates all other 21st century Terminator productions to some alternative timeline and takes their place as third film in the trilogy.

But then it makes the same old mistakes. Improbable action sequences. A too-powerful but markedly ineffectual new model of Terminator. Dark Fate? Even the title suffers from filmmaking by committee. Muddled mediocrity ensues. False Hope would have been more accurate.

To give it its due, Dark Fate does some things well. The Rev-9, for instance, comes fitted with a nifty ghost skeleton to act as its wingman. Its adversary is not a Terminator at all but rather an enhanced human whose speed and relative vulnerability make for a more nuanced contest. The Mexican setting; the casting of South American actors; the narrative shift back to female empowerment: these are all positives.

The John Connor question is more open to debate. I don’t have a problem with his absence (although I don’t think the Guatemala scene needed to be shown). If we’re considering Dark Fate as a direct sequel to Judgement Day then it makes sense. For all that Skynet was focused on stopping John’s advent as leader of the resistance, Terminator and Terminator 2 were always about Sarah Connor. Thematically, Dark Fate is a natural continuation.

The problem is that Sarah’s journey – and just about everything else – becomes lost in the mix as director Tim Miller works his way through an inherited bucket list of James Cameron’s wet dream action scenes. High-speed bulldozers? Underwater Humvees? (And Reese help us, anything to do with planes.) Apart from the insult to logic, the preponderance of faux adrenaline rushes constitutes a damning tonal dissonance between Dark Fate and the original brace of films.

Whereas The Terminator and Judgement Day were in essence SF thrillers, albeit in the latter case with some spectacular set pieces, Dark Fate is merely action for action’s sake. Linda Hamilton is denied her weary swansong, pushed instead towards a reprise of her Judgement Day character. Schwarzenegger’s T-800 fares better but is likewise shunted. Boxed in by the action carnage, Dani Ramos is accelerated in half a script through an arc that took Sarah Connor all of The Terminator and subsequently seven years between productions (a decade within the story) to traverse.

The result is as banal as it is predictable. Jacob Edwards