Doctor Who and the Ice Warriors – reviewed 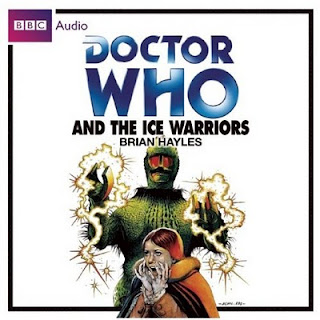 The Doctor, Jamie and Victoria land on a frozen Earth, where humanity makes a last-ditch attempt to hold back the glaciers with a computer-controlled ioniser. After a huge reptilian life form is found in the ice, the Doctor, like Gil Gerard’s Buck Rogers, must convince the humans of the future to ditch the computers for once and trust their guts.

This is a reading by Frazer Hines of Brian Hayles’ Target adaptation of his own script. The narration is slightly stilted at first; sounding at times as if different takes have been stitched together, it improves vastly once the Doctor and companions enter the scene. Hines does an uncanny Troughton, some excellent Ice Warriors, and his Jamie is undimmed by age.

The story itself is not the best the series ever produced. Though the concepts are thrilling – a new Ice Age, frozen Martians, spaceships in glaciers! – the plot involves too much back and forth between locations. Even though (as David Howe points out in the sleeve notes), the novelisation condensed the final three episodes, the story feels somewhat dragged out.

That’s not to say it isn’t enjoyable. Penley is the key to this story, the man disgusted by the way things are going who gave up on the system and turned his back on it all to live in the wild (but is persuaded to return by the Doctor). It’s the type of problem that never loses its relevance: how long do you keep trying to save a sinking ship?

In a way, you can see the Doctor here as a mediator – between Penley and the scientists he is successful, ironing out their differences and bringing Penley back to work. His attempts to reconcile humans and Ice Warriors are less successful, with predictably deadly results for the latter!