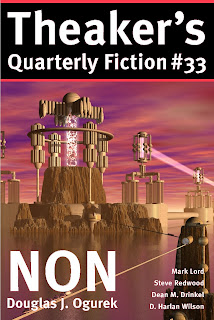 I don't think it's at all a stretch to say that this is one of the strangest issues of Theaker's Quarterly Fiction we've ever published!

Our lead story is "NON", by Douglas Ogurek, a dizzying blur of new words, new fashions and new ideas, Charlie and the Chocolate Factory as written by Anthony Burgess. I guarantee that by the end of it you'll be thinking of certain people as dreadfully uncleused.

Then we have Steve Redwood's "Nose Trek", the story of a nose that implodes upon itself, and the brave souls who go inside to investigate. What happens once the mass of mucus in a nostril has passed the Chandrasekhar limit?

"Houseguest" by D. Harlan Wilson is as odd – and exciting – as anyone who's read his other work would expect, while "El Aullido del Diablo" by Dean M. Drinkel is so entertainingly barmy that I have to confess I'm not entirely sure what it's about, but I know I enjoyed it!

By these standards, "Bird Talk" by Mark Lord is almost incongruously normal, despite its mix of witches, clerics and boozy tramps.

The issue is rounded out by a relatively normal selection of reviews (as long as you think there's nothing unusual about lengthy discussions of whether Superman can move his lips quickly and skilfully enough to mimic the softness of a human kiss, that is).

The cover is by the wonderful Howard Watts.

Download the pdf of this issue here. Ebook versions are available for free from Feedbooks. The paperback is available from Lulu.
Posted by Stephen Theaker