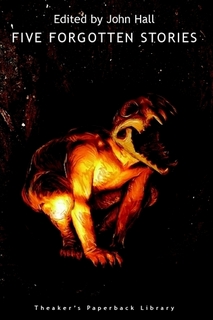 Astute readers will recall that in the winter of 1934–1935, Robert Harrison Blake – whose last days are recorded in H.P. Lovecraft’s “The Haunter of the Dark” – wrote five weird tales. There has been some controversy over these stories, notably the question as to whether they were published under different titles or lost when Blake met his untimely demise. Some ten years ago, now, I acquired an old exercise book which belonged to a certain “Robert Blake” of Providence. The document has been reliably dated to the 1930s and appears to have taken sixty-odd years to make the journey from his hands in Rhode Island, New England to mine in Yorkshire, old England. Although it is impossible to verify the identity of the author beyond a reasonable doubt, the book contains outlines for five tales with the titles mentioned by Lovecraft.
These present tales are offered as my own attempts to reconstruct them.

The five stories in this collection – The Stairs in the Crypt, Shaggai, The Burrower Beneath, The Feaster from the Stars and In the Vale of Pnath – previously appeared in Theaker's Quarterly Fiction.

John Hall is best known as a Sherlockian scholar, and a member of the International Pipe Smokers’ Hall of Fame. His numerous literary interests include Raffles, Sexton Blake, H.P. Lovecraft and M.R. James. He is the author of Special Commission, a medieval murder mystery.

The cover art is by John Shanks, who draws on demand at Homegrown Goodness.

"Required reading for the Lovecraftian fanatic." – The eNovella Review
Posted by Stephen Theaker