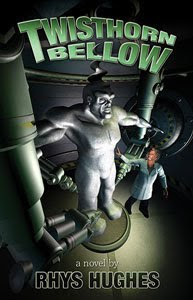 As its subtitle explains, Twisthorn Bellow concerns itself with "the unusual escapades of a self-exploding golem with a twisted horn and attitude somewhere on the astral plane and also on foot right here". Hopefully that's clear! He's a powerful golem created to protect England and annihilate evil. The book's dedicated in part to the memory of Philip José Farmer, and though there aren't many stylistic echoes here of his work, it's easy to see why Farmer would attract Hughes' admiration. Both writers delight in high concepts, intertextuality, puns, and following nutty ideas right through to the end.

In this book the idea is a Doom Patrol or B.P.R.D. devoted to the promotion of British interests, assembled by Shylock Cherlomsky, a madman with an obsessive hatred of the French. It's at its best when the monster squad gets out and about – early episodes take place largely within the base, giving the book a more claustrophobic feel than is usual for Rhys Hughes' work. The action scenes, though sketched with a raised eyebrow, are vivid and dynamic, Twisthorn's kpinga and its "madly sprouting blades" being put to devastating use on all manner of ne'er-do-wells, including "ghouls, banshees, centaurs, abominable snowmen, warlocks, mandrakes, perytons, lamias, musicians, elves, harpies, robots, moths and sundry French things".

It's not quite as commercial as I expected – it's not at all a book where Hughes has reined himself in or tried to conform to the expectations of a wider readership – and I'm not entirely sure why that disappointed me, since I enjoyed the book all the same. This is good monster fun, with some surprising cameos, including Philip José Farmer himself and a big red fellow who has no time for Twisthorn's nonsense. I read this at about the same time as Maurice Renard's Doctor Lerne, Subgod – the first book I've read that was narrated by a table! – and how funny then to find this book narrated by... well, I won't spoil it. Though I have stood on it.