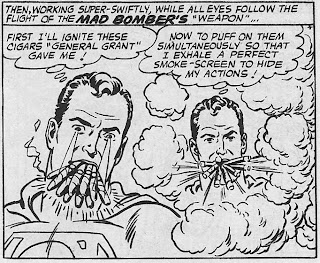 I’m never going to read a Superman book that I don’t enjoy at least a bit, but with this volume the series is beginning to struggle. Despite the presence of such classics as “The Amazing Story of Superman-Red and Superman-Blue”, this also contains such appalling duffers as “Superman Meets the Goliath-Hercules”. Almost every other story here either features red kryptonite or is an imaginary story, or relies on Superman needing to keep his identity secret for all its drama. Nothing can challenge the man who can do everything.

Oddly enough, the final panel is both the saddest and the one that points the way forward for the character. “If I can’t trust the President of the United States of America,” says Superman to JFK in 1964 after entrusting him with his secret identity, “who can I trust?” Within a decade everyone would be asking the same question for different reasons. In the short term, that would leave Superman looking like a relic from a different age, but eventually writers would realise that no matter how big his muscles, ethical and moral dilemmas hit a Superman as hard as any of us.

On a lighter note, Superman shows off a couple of interesting powers in this volume: super-smoking, in “The Goofy Superman”, and super-kissing, in “The Great Superman Impersonation”. “Lois would pass out if she knew it was Superman, my other identity, who kissed her!” thinks Clark to himself after giving Lois a smacker. You have to wonder how pleasant it would be to kiss him. For example we learn in the Goliath-Hercules story that he cannot tan, because the sun cannot damage his skin that way; presumably his lips would be pretty much rock hard. He would be forced to mimic softness by reacting to the movements of your lips at super-speed, but such a calculated procedure could only ever create the illusion of passion!