How Kevin Keller inspired me to come out of the closet... as an Archie fan!

I have an admission to make. I’ve been keeping a secret.

Over the last month or so, on the iPad, I've been reading a lot of Archie comics.

There, I’ve said it!

Reading an issue of Archie at bedtime is a great way to clear my head of whatever horrors populate the latest book I’ve been reading. Plus, they’re cheap, back issues are plentiful, and they look fantastic on there. My favourite character is Jughead. He’s hilarious. The way he eats. The way he talks with his eyes closed. His daft cut-up fedora. The way he alone is aware that they are comic book characters.

I was a bit embarrassed to mention my burgeoning love for Archie and his pals, given that they’re mainly for kids, and they have kind of an uncool reputation. At least that’s my impression of how they’re seen in the States - here in the UK I doubt many people have even heard of them, and when they have, it’ll usually be secondhand, via a reference in an American sitcom.

But reading a couple of issues of Veronica this week, #207 and #208 (published in June and July this year), I was thoroughly impressed by the gang’s first openly gay character, Kevin Keller, and so I wanted to step out of the comics snob closet and give Archie – and writer/artist Dan Parent – some props. 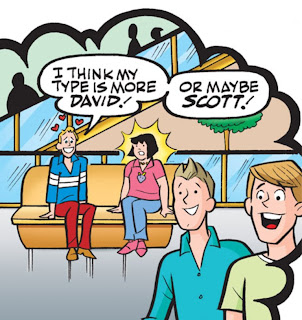 Kevin's sexuality was dealt with in a matter-of-fact way that I loved; he likes guys rather than girls, and that’s all there is to it. My wife and I take the same approach when we talk about these issues with our children. Some boys like girls, some boys like boys, that’s just the way it is. Why not just tell the kids that, rather than filling their head with nonsense? It's not like it's a big deal. Or rather, it shouldn't be.

The cherry on the cake was that that Kevin gets to say “It gets better” to a little kid who is getting bullied. 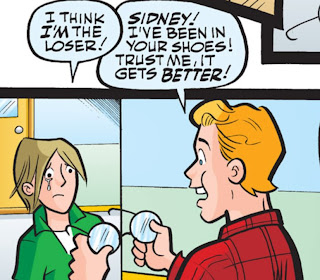 I feel like the world just got a tiny bit better. (And look at those colours!)

I’m kind of glad they took the approach of introducing a new character. If Jughead, who famously hates girls, suddenly came out of the closet, it would have made every bit of sense, but it would have brought the worst out of character conservatives.

By that I don’t mean people who are politically conservative, though there might be some overlap, but fans who don’t want characters to change. Think of the fuss about the Rawhide Kid a few years ago, or the people who go nuts at the idea of a brown-skinned actor playing the Doctor...

This way, if people want to complain about there being a gay character in the Archie gang (and I do hope he becomes a regular), they have to put their biases on display, rather than hiding them behind the uniform of a continuity cop.

So if you have an iPad, and you want to see it at its very best, treat yourself to a couple of issues of Archie, Jughead, Betty or Veronica.

By the way, there are something like 200 comics appearing each week in the Comics by Comixology app on the iPad, and I've been reading a heck of a lot of them. I'll write full reviews for the magazine of the more substantial or important ones, but expect an irregular round-up of the others here on the blog, starting soon...
Posted by Stephen Theaker