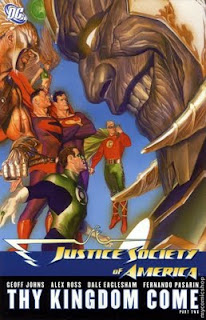 The brilliant thing about the JSA is that there always seems to be progression and continuity; this volume acts as a sequel and sort of a prequel to Kingdom Come. The Kingdom Come Superman has fled his world, the remaining superheroes having been killed in a nuclear blast, and is keen to prevent the events of Kingdom Come from happening in the current DC universe. (An incidental pleasure of the story is seeing an older Superman with the JSA again.) He knows that Gog was the progenitor of Magog, the anti-hero who caused so many problems in his reality, but the story has more twists than he expected.

Kingdom Come artist Alex Ross is on board as co-writer, and provides some typically brilliant covers and flashback pages, but Geoff Johns writes, rather than Mark Waid. It's not a surprise that there's interest in mining the rich seam of Kingdom Come for further stories, and Waid produced his own sequel in The Kingdom, but this can't help but normalise its inspiration. It takes a myth and turns it into just another story. Would we want to see the Batman of The Dark Knight Returns time-travelling like this to the current DC Universe? This is a good story, but it lessens the original; whether the trade-off was worth it I won't know until reading the conclusion in the next book.