Doctor Who: The Edge of Destruction, by Nigel Robinson – reviewed by Stephen Theaker 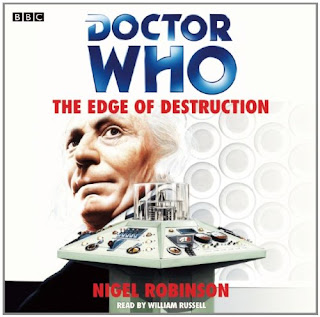 This audiobook begins with an explanation of how a history teacher and a science teacher came to be travelling through time and space with a grumpy old scientist and his fifteen-year-old granddaughter. Once listeners are up to date, we join the travellers as one by one they wake from unconsciousness, memories jumbled and lost, inside their time/space ship. Doors open and close, clocks melt, control panels give electric shocks. Before the mysteries can be solved the quartet must surmount their mutual distrust, but that won’t be easy. Ian and Barbara, the teachers, have been tricked by the Doctor before, on the planet Skaro, while young Susan explains that the Doctor too has been betrayed by friends in the past.

There have been many moments in the Doctor’s long life of which he would be less than proud: running dalek experiments on Jamie, ditching Sarah Jane Smith, quipping while a man died in an acid vat, and multiple dalek genocides. But this story set a bar for bad behaviour that wouldn’t be raised until the sixth Doctor tried to strangle Perpugilliam Brown. The Doctor here is quite the mad scientist. In the Sartrean play of argument and recrimination he behaves abominably from start to finish, curtly dismissing sensible suggestions, lying, being very rude about humans, and even drugging Ian and Barbara at one point. At the end, even an apology to Barbara turns into a bit of a lecture.

Nigel Robinson’s novelisation captures the eerie, fractious tone of the original episodes very well, and William Russell’s reading is, as with The Dalek Invasion of Earth audiobook, quite wonderful, his Doctor just as irascible as the narration describes him, his Ian, Barbara and Susan capturing their shifting moods. His introduction to CD3 is delightfully jaunty: “Disk threeee!” The music is well-judged, the soundtrack missing only a sprinkling of authentic Tardis sound effects. Overall, a sometimes gruelling but always gripping three-and-a-half hours for the listener. After all the theories and arguments, the solution when it comes is brilliantly bathetic. For Doctor Who fans this is an almost pure pleasure.

Doctor Who: The Edge of Destruction, by Nigel Robinson, read by William Russell. Audiogo, 4xCD, 3hr20. Amazon UK. Amazon US