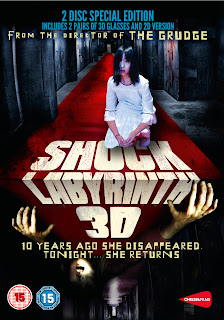 Five small children enter a deserted haunted house, but only four emerge. Years later, a grown up Yuki, the one they left behind, turns up at the door of blind Rin, and the friends gather to take her to hospital. The hospital is deserted, time stands still, and they are back in the shock labyrinth – a huge ghost house – to be haunted by their guilty secrets.

Scary for them, less so for the viewer; the film achieves its most alarming moments by putting young children in danger as the timelines (apparently) cross. Kids in trouble aside, it’s mainly four young adults wandering round a haunted house without much going on. The film tries to conceal this with flashbacks and flashforwards, but the core of the film is not terribly interesting.

The 3D aspect does it no favours – the 3D version is a red-green mess, while the 2D version is full of embarrassing would-be 3D set-ups that puncture the film’s seriousness. Not a film I can recommend. Lordi’s Dark Floors, previously reviewed in these pages, is remarkably similar but much more fun. Coming from the director of The Grudge, this was a huge disappointment.