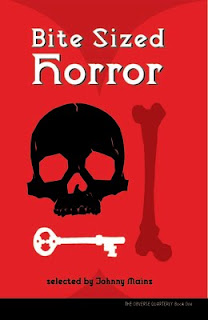 The title of this book might lead you to expect a collection of flash fiction or vampire stories, but it's neither, simply a collection of six short stories of average length. The introduction explains that there is no intentional theme, but there is perhaps an accidental one: the stories all seem to feature children, or parent-child relationships, in prominent roles; Pint-Sized Horror, you might say.

The two best stories bookend the collection, smartly ensuring that the book gives a good first impression, and sends the reader away happy. They were also, for me, the two stories in which one sensed most strongly a character to the writing; one could almost imagine the rest being written by a single author, but not these.

Reggie Oliver's "The Brighton Redemption" concerns the efforts to free from prison and reform a child murderer. Like the other stories I've read (and seen performed) by this author, it is told in a very traditional style, but that's not a bad thing: the narrative is controlled, patient and politely horrific. With "The Carbon Heart" Conrad Williams ends the collection with style and purpose, the main character searching for a girl whose mother had died giving birth to her.

In between is more of a mixed bag, although David Riley's zombie tale "His Pale Blue Eyes" is also good; as gripping - though also as solidly generic - as a typical episode of The Walking Dead. It features a little girl who is willing to make sacrifices to keep her parents alive. If one wonders why she doesn't take slightly less drastic measures to save them, that only adds to the horror of the story. Severely damaged people don't always behave in reasonable ways.

“The Unquiet Bones” by Marie O'Regan was also unnerving, both for the strangeness of its best ideas - tiny bones or teeth sticking out from the walls to catch the unwary - and for a reason peculiar to this reader: the opening pages - in which a young couple take refuge in a spooky house - was almost precisely the same as a submission I’d once read for TQF. That says nothing about the story, and quite a bit about how reading submissions by the dozen can spoil you for short stories. This wasn't my favourite story from the collection, but I enjoyed it.

In Paul Kane’s “The Between" a handful of people are trapped in a lift, and open it to find themselves suspended in darkness, and attacked by a flying shark monster. The lift lights continue to work, because it suits the story. The protagonist is an aggressive father struggling to get access to his son. Also in the lift is the lawyer for the other side, described as "the female lawyer". Though he followed her into the lift with the intention of harassing her, by the end she realises what a great guy he is, and earns herself a patronising kiss on the forehead.

Johnny Mains also includes a story of his own, a risk for an editor; if the story isn't up to scratch, it brings the editor's judgment into question. However, the benefit for readers can be a bonus story, sometimes one which the editor has been able to acquire a little more easily than the others. "The Rookery", about a father and son who encounter a demonic crow-god-type-thing, isn't the strongest story here, but it certainly doesn't embarrass the others by its presence.

I've given Obverse a rather rough time over proofreading in earlier reviews of their books, and this book is a bit better in that regard. There are a couple of clangers - including a character whose name changes from Sean to Shaun part-way through a story - and a handful of smaller mistakes, but nothing to put off potential subscribers to the quarterly.

The three forthcoming titles in the series sound very interesting: Senor 105 and the Elements of Danger, The Diamond Lens and Other Stories, and Zenith Lives! Monsieur Zenith was one of the inspirations for Elric, and a contribution from Moorcock is apparently in hand! Subscribe here.

Beware of possible bias: the reviewer worked with three of the contributors to this book on the British Fantasy Society committee.
Posted by Stephen Theaker