Kindle Fire - but not in the UK 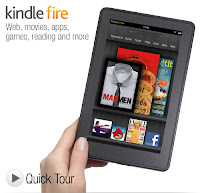 Bit disappointed that the new Kindle Fire isn't launching in the UK yet - although I imagine Amazon's recent investment in LoveFilm (and hence getting its hands on LoveFilm's streaming deals) means it'll be out here eventually.

Although I love my iPad, it mainly gets used for reading, listening to music and the radio, idle browsing and playing the odd game. The only serious work I do on it is proofreading. I do all my writing on our Samsung Chromebook nowadays: it has a proper keyboard, for one thing, and doesn't get annoyed when I try to use Google Docs.

The Kindle Fire looks to me like it can do almost everything I still use the iPad for, but is much, much cheaper. If it was available here, I'd have pre-ordered one already for Mrs Theaker's birthday. (Last year I got her a third generation Kindle, and she's used it pretty much every day since.)

The US is also getting the Kindle Touch, which has no keyboard, but does have speakers, and unlike the Kindle Fire still uses e-ink, which is great: I was worried by rumours that Amazon were planning to ditch e-ink screens altogether, and that would have been nuts. The iPad screen is great for reading comics or watching movies, but I wouldn't choose to read a long novel on one, and I imagine it'll be the same for the Kindle Fire. Bit worried by the touchscreen – the Sony Reader Touch was horrid – I spent more time cleaning the blasted thing than reading it – but I can't imagine Amazon would put out something quite that hopeless.

All the UK is getting for now is the new, ultra-cheap Kindle, which lacks speakers (so no audiobooks) and lacks a keyboard. For most readers, the trade-off in weight and cost will probably be worth it. It's down to 6oz now, apparently, which is old-timey talk for... checks with Google ...170g. About the weight of a small 200pp paperback. I think it'd be a downgrade from the Kindle I've already got (which is now renamed the Kindle Keyboard) – I love being able to make annotations with the keyboard – so I won't be getting one, but I imagine it'll do very well for them, especially at £89.
Posted by Stephen Theaker