Doctor Who: The Perpetual Bond, by Simon Guerrier – reviewed by Stephen Theaker 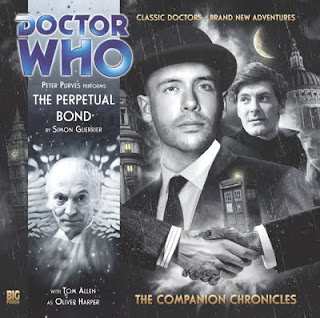 Having lost many friends in the battle to foil the daleks’ master plan, the first Doctor and Steven are rather pleased to find the Tardis has taken them to 1960s London. Plans to look up Ian and Barbara are interrupted by the sight of a mushroom-headed alien walking down the street. The trail leads to the City, where humans and disguised aliens are trading in a truly shocking commodity.

Like the other Companion Chronicles CDs, The Perpetual Bond falls midway between an audiobook and a play. Peter Purves narrates most of the story, and reads the dialogue of Steven and the Doctor, while Tom Allen narrates other sections and plays Oliver Harper, a shady sort with a good heart who seems likely to appear in future stories. Both acquit themselves well, but the story suffers from Doctor Who’s peculiar problem: a programme for children whose spin-offs are often aimed at adults. In this story that manifests itself in a setting and plot that’s rather dull for children, read in a way that seems patronising to an adult.

That aside, I did enjoy it. It feels very true to that period of the show, and the first Doctor is very much in character, a twinkle in his eye, a naive sort of craftiness to his dealings with the villains. Its reflections on the relationship between a government and its people are very pertinent to the present day, while more positively it offers a time traveller’s view of how progress might be measured from one era to the next: more spectacles, more teeth, and so on. We tend to expect the future to be worse, but I think we’re all glad to not live in a time when diabetic children would simply die upon the disease’s onset.

The two-episode structure works well. It avoids the need for too much superfluous action and lets the idea take centre stage. A very pleasant way to spend an hour.