Buffy the Vampire Slayer: Wolves at the Gate – reviewed by Stephen Theaker 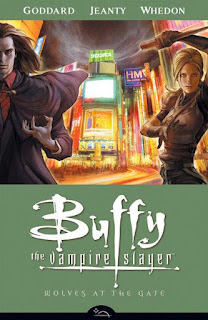 One of my very favourite television programmes continues in comics form in Buffy the Vampire Slayer, Season Eight, Vol. 3: Wolves at the Gate (Dark Horse, tpb, 136pp), collecting issues eleven to fifteen of the comic. Most of this book is written by Drew Goddard, but it opens with a single issue story by Buffy creator Joss Whedon, “A Beautiful Sunset”, in which Buffy encounters the Big Bad for this season, Twilight. He’s a dangerous fellow—he throws a steeple at her!—whose plan is to take away Buffy’s invincible armour: “her moral certainty”. (It would certainly slow her down a bit if she didn’t just assume all vampires were naughty by nature.) There’s a tease of his identity that would have been cleverly tantalising had I not learnt it already from the Amazon description of volume eight.

The four issues written by Drew Goddard give the collection its title. In “Wolves at the Gate” the slayer castle is attacked by vampires sharing the powers of Dracula, who made a brief, bathetic appearance in the TV series. Investigating takes the slayers and the gang—plus Dracula—from Scotland to Japan, where a vampire clan has plans to undo Buffy’s gift of slayerhood. It’s a story with many highlights—actually, scratch that, it’s a story entirely made up of highlights. Xander’s hilarious and oddly touching relationship with Dracula. Everyone bursting in on Buffy’s latest romantic tryst. Giant dawn fighting a giant mechadawn.

The pleasures of the Buffy season eight comic are essentially those of the original series: stories with consequences, well-planned plots, laugh-out loud dialogue, relationships that develop naturally in unexpected directions. Pencils throughout are by Georges Jeanty, with inks by Andy Owens, and they prove extremely adept at depicting each of those elements. Panels like those where Willow and Buffy discuss the latter’s latest romance display the comic skills of Kevin Maguire, while the action is always clear and powerful. They manage the tough trick of capturing the actors’ likenesses perfectly without the stiffness that afflicts many licensed comics. They draw a very pretty Buffy, and if she sometimes looks very petite, that’s because she really is; that’s what makes it so impressive when she fights the big monsters.
Posted by Stephen Theaker