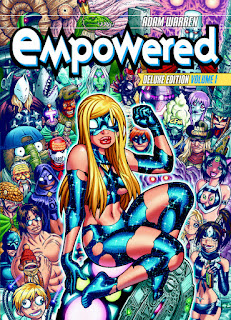 Empowered, Deluxe Edition, Volume I (Dark Horse, hb, 712pp), written and drawn by Adam Warren, collects three previously released paperbacks together with a selection of bonus materials. Empowered—or Emp for short—is a novice hero whose tendency to get captured by villains—and tied up, usually with a ball gag in her mouth—has made her a laughing stock in the superhero community. Not to mention the subject of many, many embarrassing photos and internet videos. She’s not completely useless, it’s just that her figure-clinging suit’s power declines sharply as it gets damaged, and it is a very, very delicate suit. Early strips have little more than that to them, but Emp soon makes two good friends and one good enemy who improve the book immensely. Thugboy is a professional henchman with a dangerous history of ripping off super-villains—he falls for Emp and vice versa while he’s tying her up. Ninjette is a sexy bad girl with her name on the bum of her shorts. The fourth member of their little gang is the funniest, Emp’s one great conquest, the Caged Demonwolf, captured in an alien bondage belt and now given to issuing dire threats from the coffee table, frustrated by the reluctance of the dirty mammals to let him watch their filthy coupling. While the addition of these characters doesn’t lessen the saucy elements of the book, it does create a much nicer vibe and introduces some slow-burning plots. One of the book’s sweetest moments is when Thugboy says to Emp, following one of her many humiliations, that she’s the bravest of superheroes, because she goes out to fight despite knowing how vulnerable she is.

The book does rather have its cheesecake and eat it by commenting on its own sauciness, most obviously on the chapter heading pages, where Emp addresses the reader directly, even explaining that the earlier stories grew out of “special commissions” for customers with particular tastes. For me the discomfort I might have felt at reading a book so dedicated to tied-up, semi-naked women was lessened by the absence of any sexual threat. The thugs, villains and super-villains all know the “unwritten code” of the capes: any impropriety and they die, which makes much of what goes on here almost as innocent as a game of kiss-catch. Emp’s anxieties relate to how poor she is at her job, how big her bum looks in that outfit, why her work colleagues (the Superhomeys) show her so little respect, and whether she can believe her boyfriend when he says she’s fantastic.

Empowered presents the reviewer with a dilemma, similar to that involved in reviewing Conan comics: how to approach a book whose main appeal stems from its saucy pictures of sexy ladies, when one doesn’t want to be thought a complete sexist? I can’t deny that my favourite thing about the book was that Empowered and Ninjette are extraordinarily attractive and sexy, but it is also funny, very knowing about its sauciness, and Adam Warren’s manga-style art is very appealing. It looked to me as if the pages were pencilled but not fully inked; that might be my ignorance showing, but whatever technique was used it gave the comic a very casual, warm, friendly feel. The last hundred pages were absent from my review pdf, so I can’t comment on all of the bonus materials, or indeed on whether the ongoing plots reach any kind of resolution, but the first six hundred pages were smashing.
Posted by Stephen Theaker