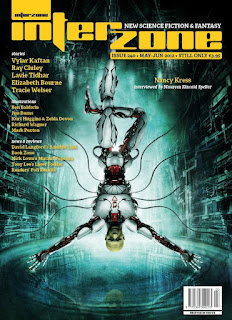 I joke, as usual, but you cannot imagine how proud I am to have written for these magazines. I first read Interzone when I was at school, long, long decades ago. Having my first review appear in there was the greatest writing achievement of my life so far.

In issue 239 I review Andy Remic's Theme Planet, and in issue 240 there's a Theaker double-bill, reviewing Jane Carver of Waar and The Not Yet by Nathan Long and Moira Crone respectively. In issue 27 of Black Static I review Alison Littlewood's A Cold Season.