Monkey vs. Robot by James Kochalka – reviewed by Stephen Theaker 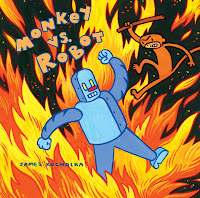 Originally published in 2000, Monkey vs. Robot (Top Shelf, digital graphic novel, 150pp), written and drawn by James Kochalka, sees a group of monkeys react angrily to the pollution being caused by a factory and the robots who work for it. The pages are square with one to four panels each. There is very little dialogue—a robot declaring “The future is now” early on, and the factory computer begging for its life towards the end, for example—and that makes it a very quick read (so much so that one feels almost guilty to see it took a year to create). It’s a sad tale: imagine the stormtroopers of Return of the Jedi mounting a comeback against the ewoks, drawn with heartbreaking cuteness. The monkeys are essentially murderous eco-terrorists, but one does want them to win. It looks smashing on the iPad, and is available on Comixology at a remarkably cheap price. Good stuff. I could see myself becoming quite a fan of James Kochalka.
Posted by Stephen Theaker