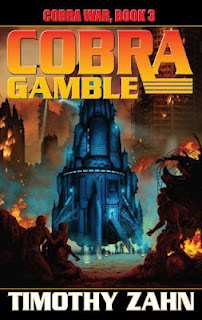 Timothy Zahn first introduced the concept of Cobras—cybernetically enhanced warriors with built-in weaponry—through the novelette, “When Jonny Comes Marching Home”, in the January 1982 edition of Analog. A trilogy of novels soon followed—Cobra (1985), Cobra Strike (1986), Cobra Bargain (1988)—in which Zahn further explored not only the military but also the social and political implications of mankind’s having created soldiers who are permanently armed; in effect, living weapons. Although Zahn then moved on to other projects—most famously, perhaps, his Thrawn trilogy, which relaunched the Star Wars franchise in written form—he has returned twenty years later with a second Cobra trilogy (Cobra War) and has even set the stage for a third (Cobra Rebellion). With his country (the USA) continuing to embroil itself in a series of political/cultural/military conflicts, Zahn (and his readers) might well regard the Cobras as being even more relevant now to society than they were thirty years ago.

Zahn often narrates his stories from multiple points of view, moving from one to the next with each chapter and effectively weaving together three or four plot lines. The technique is particularly well suited to Cobra Gamble, which follows the exploits of the original Cobra Jonny Moreau’s granddaughter Jin Moreau and great grandchildren Merrick, Lorne and Jody Broom—third and fourth generation Cobras (except for Jody)—as they struggle to fight off one race of aliens (the militarily dominant Trofts) while simultaneously upholding an alliance forged recently with a second (humankind’s longstanding enemies, the downtrodden Qasamans). Zahn’s focus is on action and ingenuity, but the real strength of Cobra Gamble (and other Cobra books) is the pervading xenotopical backdrop, which both defines the conflicts and conspires against the protagonists.

Although neither alien race is described physically—the Qasamans have sacred leaders and are male dominated; [the Trofts, they come from feudal demesnes and their speech is translated in square brackets; the Trofts, they seem archaic and slightly ponderous]—their cultural differences are manifest and are the source of much bigotry on both sides. To be sure, those who go looking for analogous real-world diplomatic relations will have no difficulty finding them in Cobra Gamble, but if they make such a comparison with patriotic fervour in mind, or with a view to pointing the finger, then they may well be setting themselves up for disappointment. Zahn’s Cobras have their own ethos, their own morals, and are confounded rather than driven by prejudice. Indeed, it is seemingly inevitable in Cobra history that the bravery and triumphs of the individual be subsumed into a dishearteningly Machiavellian big picture that stands guard over the plot and so prevents it from turning, however inventively (or even righteously), to escapism.

Plenty of Timothy Zahn fans from the early days will maintain that his best writing comes in the form of those truly stand-alone pieces that focus more on scientific (or at least speculative) ideas than upon action. Zahn won the 1984 Hugo Award for his novella “Cascade Point”, and subsequently crafted many shorter works and several novels—Spinneret (1985/1987); Triplet (1987); Deadman Switch (1988)—that are more in the vein of scientific intrigue and suspense than the faster moving military science fiction of his Blackcollar or Cobra books. There have been fewer of these ideas-driven works in recent years, and even those that started out that way—Dragon and Thief (2003); Night Train to Rigel (2005)—have tended to become drawn out into overly long series. This being said, Zahn has remained eminently readable and has well and truly mastered the art of creating, hooking the reader on, and then cleverly solving problems that derive their sting from the interaction of humans and aliens through all their (at times allegorical) differences.

One unfortunate facet of the Cobra War trilogy—Cobra Alliance (2009), Cobra Guardian (2011), Cobra Gamble (2012)—is that it carries on a tradition of titular (and cover design) homogeneousness that may befuddle the unwary so far as to have them reading Zahn’s books out of order.[1] And yet, just as the Battle of Waterloo can be studied either as part of or independent from the Napoleonic Wars that it brought to a close, and likewise the Napoleonic Wars as either an extension of or independent from the French Revolutionary battles that preceded them, so too does Zahn present an unfolding series of conflicts with sufficient individual merit to negate any overarching need for chronological fidelity. By focusing very much on the “now” of Cobra history, by acknowledging the past yet always seeking to pull the reader into the urgent flow of current events, Zahn imbues his writing with a certain vitality in both thought and action, ensuring that each Cobra undertaking can stand independent of its fellows.

Wookieepedia shows Zahn as having written nine Star Wars novels to date,[2] and the proposed Cobra Rebellion trilogy will likewise take his Cobra output to nine books—not quite Mills & Boon in quantity (Moreau & Broom?) but enough of a series to leave prospective readers wary of its becoming overly familiar. People who already have acquainted themselves with Timothy Zahn through his Star Wars and Cobra offerings will indeed find Cobra Gamble to contain variations on a theme, but there is a progression, too, and Zahn pays sufficient attention to new scenarios that those who have only belatedly arrived at his writing—should they opt to check in at Cobra War Book 3 rather than somewhere further back along a road that now spans 30+ years—will experience in Cobra Gamble at least some of Zahn’s distinctive alien world-building and narrative pull.

Cobra Gamble ends Zahn’s second labour—for now, at least—but with a pinkie promise of arcthrowers and fingertip lasers (and antiarmour lasers to boot) it seems the Cobras are destined to fight on. Zahn is certainly prolific enough to launch a third Cobra trilogy (and sooner rather than later, too) but as to what comes next from his pen: only the Delphic Oracle—and perhaps a few Baen Bigwigs—can say.

1. Further complicating the increasingly confusing range of Cobra books is that, subsequent to their original publishing but prior to the release of the Cobra War trilogy, Cobra and Cobra Strike were published as a single volume entitled Cobras Two (1992), and then again with Cobra Bargain as the Cobra Trilogy (2004).