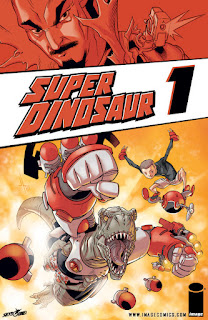 Super Dinosaur, Vol. 1, by Robert Kirkman and Jason Howard (Image Comics, tpb, 128pp). Derek Dynamo is a cocky kid genius whose best friend is Super Dinosaur, a genetically-modified Tyrannosaurus Rex. As Rexes go, he’s quite small—only about 300 cm—but he’s intelligent, tough and wears cybernetic harnesses that provide him with weapons, wings and best of all a decent pair of fists, for punching the dino-men minions of Max Maximus, monsters like Terrordactyl, Dreadasaurus and Breakeosaurus. Derek’s dad, Doctor Dynamo, has been a bit fuzzy-minded since the first great battle with his arch-nemesis, but the boy genius has secretly been taking up the slack.

In this book the status quo is disturbed. First by Bruce and Sarah, mom and pop technicians sent by the army who might discover Derek’s little-cover-up once they arrive at the Dynamo Dome. And how will their two cute daughters affect the relationship between Derek and Super Dinosaur? There aren’t any cute Tyrannosaurus Reginas out there, as far as he knows. And secondly, some of the dino-men (and dino-women) are no longer satisfied to hench for Maximus, and led by The Exile and Tricerachops they are making plans to exterminate humanity.

This neat little comic is perfectly pitched at nine-year-old children, full of the exuberance of kicking butt, a Saturday morning cartoon or toy line from the eighties done right. I’m three decades past my ninth year, but even I appreciated the tight, bright, action-packed art, the intriguing little mysteries, the pure-hearted heroes, the evil-hearted villains, the friendly, joyful atmosphere. Adults will find it disposable but pleasant, kids will love it. Buy it as a birthday present for the Ben 10 fan in your life and they won’t be disappointed.
Posted by Stephen Theaker