Doctor Who: The Invasion of E-Space – reviewed by Stephen Theaker 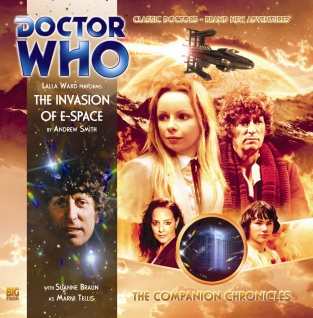 In Doctor Who: The Invasion of E-Space (Big Finish, 60 mins plus extras) Romana tells a story that happened somewhere between Full Circle (where the Tardis acquired an Adric) and Warriors’ Gate (where the Doctor and Adric escaped E-Space, leaving Romana and a K-9 to fight for Tharil liberation). Lalla Ward is helped in her narrative duties by Suanne Brown, playing Marni Tellis, who has been investigating a series of murders on her home planet Ballustra. Those deaths were the prelude to an attack by Farrian raiders, who are invading from our universe by way of an artificial charged vaccum emboitment.

Both performances are good, although the similarity of the actresses’ voices sometimes makes for a moment or two of confusion when the narrative switches between them. Both are entertaining in the nine minutes of extras at the end, Lalla Ward obviously having not the slightest idea which stories she’s done in the past, or what she has signed up to do in the future.

The story is a decent enough invasion tale, but I can’t find a great deal to say about it. It’s not complete rubbish, but it’s nowhere near brilliant, coming and going without making much of an impression. Andrew Smith, writer of the aforementioned television adventure Full Circle, packs quite a lot into his two episodes, but there isn’t much to think about, nor much to care about. Eight billion people may live on Ballustra, but it’s hard to worry about them when you’ve only ever heard one of them speaking; the story doesn’t do enough to make them feel real.

Overall, not really recommended except to super-fans of Lalla Ward.
Posted by Stephen Theaker