The Hobbit: The Desolation of Smaug, reviewed by Douglas J. Ogurek 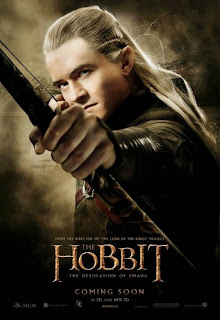 Smaug may desolate, but Legolas steals the show in a superb epic fantasy adventure

Ostensibly, The Hobbit film series is about its namesake character: Bilbo Baggins. The first film, An Unexpected Journey (2012), focuses on Bilbo, who undertakes an expedition both physical and mental. However, in this second installment, The Desolation of Smaug (2013), returning director Peter Jackson (who also directed the Lord of the Rings (LOTR) trilogy) moves further back, assuming a wider view on a group of unlikely and in some cases likely heroes. Those coming to see Desolation aren’t just coming to see Bilbo; they’re coming to see a collection of beloved characters. Moreover, true to the contemporary western culture that spawned such blockbusters as The Avengers (2012), Desolation has minimized those pesky internal struggles, and taken external challenges and battlefield bravura to the next level.

Bilbo, his dwarf companions, and Gandalf the Grey (wizard) continue their quest to the Lonely Mountain on the once-thriving dwarf Kingdom of Erebor, which the dragon Smaug has desolated (hence the title). Dwarf leader Thorin Oakenshield hopes to gain passage to the mountain and use Bilbo’s thieving skills to seize the Arkenstone. Then Oakenshield can assume kingship and the dwarves regain their home from Smaug, who has shacked up in the mountain’s treasure trove.

The action begins when Bilbo, the dwarves, and Gandalf arrive at Mirkwood, a forest that poses threats both arachnid and elfin. The barbaric orcs are in pursuit of the dwarves, and to top it off, Gandalf, without sufficient explanation, concludes that he’ll be unable to accompany Bilbo and company through the forest.

The group confronts a variety of adventures in the woods. A scene in which Bilbo and the dwarves ride wine barrels down rapids stands as one of the most compelling action sequences this reviewer has seen. Axes and arrows fly, orcs fall, barrels bob and roll, and through it all skips, slides, spins, and hops Legolas, the consummate elfin warrior. More on him later.

Another highlight is Bilbo’s descent into the treasure trove. The smug Smaug’s resonant voice (provided by Benedict Cumberbath) and the shlinking – yes, I made that up – sounds as Bilbo climbs and slides down the vast swells of gold and jewels in pursuit of the Arkenstone immerse the viewer in the action.

Meanwhile, Gandalf’s side quest to discover more about the mysterious Necromancer seems a bit forced in its attempt to neatly package The Hobbit and LOTR stories.

Look Everyone: It’s the Inimitable Legolas
Some of this reviewer’s favorite scenes from the LOTR trilogy involve the battlefield acrobatics of Legolas. From a standing position, he mounts a galloping horse. He single-handedly ascends a massive Oliphaunt, takes out all its passengers, kills the creature, and then slides down its trunk for a picture-perfect landing. And the speed! The astounding speed!

The blond elfin bowman and beloved member of the LOTR Fellowship of the Ring does not technically appear in Tolkien’s novel The Hobbit. Therefore, Jackson risks ostracizing Tolkien purists by sliding Legolas into Desolation.

The risk pays off. From his smooth entrance in a Mirkwood fray to his orc slaughter in Laketown, Legolas moves through this film like a whirlwind.

The spell that Legolas casts over so many fans deserves further scrutiny. As the SF/F community continues to endorse stories with “QUILTBAG” elements, Legolas, with his Barbie doll locks and his impeccable shave, presents a somewhat genderless counterpoint to the traditionally gruff male action hero exemplified by Thorin Oakenshield. During their journey, the dwarves climb through toilets or get fish dumped on them. That sort of filth seems below Legolas, to whom even a tiny nosebleed seems amiss.
Legolas never gets dirty, his speech never falters, and he rarely misses his mark. To watch Legolas fight is comparable to watching a ballet set to technical death metal music. His fighting ranges from displays of agility to the barbarity of shooting arrows into orcs’ faces at point blank range.

Desolation also introduces Tauriel, Legolas’s female counterpart. Though Tauriel’s lineage isn’t as royal as Legolas’s, her battlefield skills are nearly as impressive. With Tauriel comes the beginning of a love triangle between her, Legolas (who isn’t very affectionate), and the dwarf Kili. When Kili is injured, Tauriel must make choices between doing what “Mr. Perfect” requests (i.e., staying out of the fight) or helping Kili.

Economics Carved in Arkenstone
Desolation also perpetuates the age-old arguments about the influence, both good and bad, of wealth. The character affected most deeply is Thorin Oakenshield. The Arkenstone that Thorin seeks represents not only the resurrection of his people, but also the potential to corrupt the would-be king. Remember that an obsession with wealth lead to Thorin’s father’s downfall. So avarice is in the blood.

And how does Thorin appeal to the people of Laketown to support his quest to defeat Smaug and take back his home? Redemption? No. Safety? Wrong again. Glory? Courage? No and no. Rather, the deep-voiced leader uses the almighty dollar! He promises the humans a share in the gold within the mountain. Smart.

Certain scenes could have been cut – the “skin changer” at whose residence the group hides comes to mind – but on the whole, Desolation stands as a highly recommended epic fantasy that equals in excellence the film that precedes it. – Douglas J. Ogurek
Posted by Douglas J. Ogurek