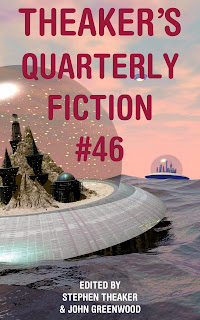 Our print format changes a bit with this issue, shaving an inch off in each direction. Not sure if we'll stick with the new size until we see how the printing goes, but as ever the goal is to make the publication easier to produce and easier to read. I hope you'll like it.

/ on Amazon.com
The ebook is also available on Feedbooks and Lulu (both free)

All 45 back issues are also available for free download, in various formats.

Charles Wilkinson’s short stories have appeared in Best Short Stories 1990, Best English Short Stories 2, Midwinter Mysteries and London Magazine. A collection, The Pain Tree and Other Stories, was published by London Magazine Editions. Ag & Au, a pamphlet of his poems, recently appeared from Flarestack Poets, Birmingham. Previously in Theaker’s: “Notes on the Bone” (#41) and “Notes from the Undergrowth” (#44). This issue: “Petrol-Saved”.

Douglas J. Ogurek reviews The Hunger Games: Catching Fire for us this time. His work has appeared in the BFS Journal, The Literary Review, Morpheus Tales, Gone Lawn, and several anthologies. He lives in a Chicago suburb with the woman whose husband he is and their five pets. His website: www.douglasjogurek.weebly.com.

Gary Budgen’s fiction has been published in a number of magazines and anthologies including Interzone, Theaker’s Quarterly Fiction (“Through the Ages”, #43) and Morpheus Tales. Recently he has had stories in the anthologies Where Are We Going? and Urban Green Man. He is a member of London Clockhouse Writers. Read more at http://garybudgen.wordpress.com. In this issue: “Black Ribbon”.

Howard Watts is a writer, artist and composer living in Seaford who provides the fantastic cover art for this issue. In fact, he provided it over a year ago, for the issue originally intended for Christmas 2012! Check out his Deviantart page.

Jacob Edwards reviews About Time, Computing with Quantum Cats, The Day of the Doctor and Gravity in this issue. His heart belongs to Australia’s speculative fiction flagship Andromeda Spaceways Inflight Magazine, but we’re happy to be his holiday romance. This writer, poet and recovering lexiphanicist’s site: www.jacobedwards.id.au.

Jessy Randall’s stories, poems, and other things have appeared in Asimov’s, Flurb, Lady Churchill’s Rosebud Wristlet, LQQK, McSweeney’s, and Star*Line. Her website is personalwebs.coloradocollege.edu/~jrandall/. Her story in this issue: “The Night of Red Butterflies”.

Josie Gowler specialises in writing weird tales set in the English East Anglian Fens, and science fiction and fantasy short stories; she has most fun when these all overlap. She’s been published in 365 Tomorrows, Lorelei Signal, Theaker’s Quarterly Fiction (“Soldier”, all the way back in #28) and Bewildering Tales. She is a Napoleonic re-enactor and is currently working on a trashy coming-of-age space opera. Her story in this issue is “The Lazarus Loophole”.

Mitchell Edgeworth lives in Melbourne, Australia, and his fiction has been published in The Battered Suitcase and SQ Mag, as well as here. He keeps a blog at www.grubstreethack.wordpress.com and tweets as @mitchedgeworth. “Customs” is the fourth in his Black Swan series to appear in these pages. Like everything we publish, it can be read quite happily in isolation, but if you want to find out how the Black Swan got off the ground, see his stories in #40 (“Homecoming”), #42 (“Drydock”) and #43 (“Flight”).

Ross Gresham teaches at the Air Force Academy in Colorado Springs. His stories have previously appeared in #34 (“Name the Planet”), #41 (“Milo Don’t Count Coup”) and #44 (“Milo on Fire”). His story in this issue is “Wild Seed”.

Stephen Palmer is the author of seven published novels, including Memory Seed and Glass (Orbit), Muezzinland, and Urbis Morpheos (PS Publishing). His short fiction has been published by NewCon Press, Wildside Press, SF Spectrum, Rocket Science, Eibonvale Press, Unspoken Water, Infinity Plus and Solaris, plus two more currently unmentionable. Ebooks of all his novels have recently been published by Infinity Plus Ebooks, who will also be publishing his forthcoming novel Hairy London. He lives and works in Shropshire, UK. His story in this issue: “The Mines of Sorrow”.

Stephen Theaker reviews all sorts of things in this issue. He even liked some of them. Further to last issue’s editorial, he got up to 107 consecutive days of writing at least 250 words a day (getting up to an average of 837), before post-Nanowrimo fatigue kicked in and brought the run to a halt on December 5. His work has also appeared in Black Static, Interzone, Prism, the BFS Journal, and the letters page of the NME. (He wrote to defend the authenticity of the Manic Street Preachers, comparing them favourably in that regard with bands like Curve. Time has – as usual! – proven him quite right.)
Posted by Stephen Theaker