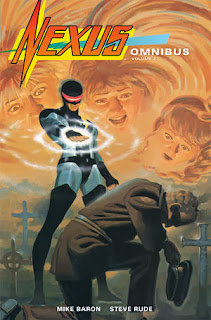 Nexus Omnibus, Vol. 2 (Dark Horse, ebook, 423pp; Dark Horse app purchase), written by Mike Baron with most artwork by Steve Rude, collects issues 12 to 25 of the original series from First Comics. They continue the comic’s odd mix of high seriousness and low humour. The former: the punishment of genocidal maniacs, as super-powered Nexus puts to death the mass murderers of whom he mysteriously dreams. An example of the latter: the ongoing adventures of Clonezone the Hilariator, a terrible Catskills-style comedian who travels the galaxy from one crummy gig to another, always in hope of making it big.

In this volume the main storyline goes in a number of interesting directions. The dreams get too much for Nexus and he has surgery to blank them out, leading to him live like the guys from Men Behaving Badly, only with more smashing of televisions and accidental deaths. Nexus’s girlfriend gets fed up with him and leaves their home planet Ylum to establish a spaceship factory on Mars. When Nexus’s powers are finally restored, his nightmares will bring him to our own solar system.

I wish I could have read this book in Comixology’s app. Dark Horse do deserve respect for not joining the rush to hand the entire comics industry over to one distributor, but using their apps is a struggle. The iPad app crashes if the device isn’t connected to the internet, it took months for this purchase to show up on there, and even then the app couldn’t complete the download without crashing. The Android app downloaded the book, but the guided panel view is unhelpful, an unnecessarily huge swipe is required to turn the page, there are no options for blanking out the panels not currently focused on, and it hangs for a second before flipping.

Despite those off-putting problems, I enjoyed the book. Mike Baron’s writing here has a sour flavour, seeming to find its source in anger and frustration rather than joy or pleasure, but that gives it a unique feel. It’s a book about consequences, whether it’s Nexus giving retribution for almost-forgotten sins, or the surviving children of his victims vowing to seek out and punish him in their turn, and as consequences accumulate it becomes very grim. The bursts of zany humour didn’t click with me at all, especially when mixed with stories featuring murder and abuse. The book’s biggest flaw is the interpolation of the painfully unfunny Tales from the Clonezone backup strips, which break the more consistent mood of the Nexus adventures. Getting through its eight pages was never anything less than a trial, nobly endured to reach the next episode of Nexus.

The artwork is where the book shines. The stylish pencils on the main strip are by Steve Rude, with inks by Eric Shanower and John Nyberg, while Shanower, Mark A. Nelson, Hilary Barta and Keith Giffen pencil backups and fill-ins. Despite the many hands at work, the style is consistent, striking page and panel design always a major feature. Perspectives constantly change and aliens look truly bizarre. Artistry is evident on every page, not least in Les Dorscheid’s subtly shaded colours; the Marvel and DC colouring of the period looks rudimentary in comparison.

Overall, recommended, but buy it in print – not often you’ll hear me say that! – and skip the Clonezone stories till you’ve read the rest. They rarely feed back into the Nexus stories, and you’ll resent them much less as an extra.
Posted by Stephen Theaker