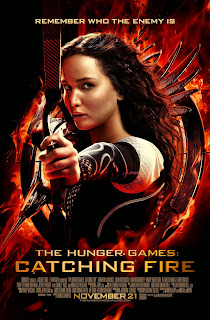 Rarely does a movie outshine the book that inspired it. The Hunger Games: Catching Fire blazes as an exception.

Catching Fire, the middle installment in Suzanne Collins’s hugely popular Hunger Games trilogy, divides into two stories that could stand alone. The second and far better half details the Hunger Games’ 75th anniversary “Quarter Quell”. District 12 tributes (i.e., competitors) and winners of the last game, Katniss Everdeen and Peeta Mellark, square off in a fight-to-the-death match against past victors from the nation of Panem’s other eleven districts. Collins writes about this battle royal with skill, and the film follows suit.

The first half of the novel, however, only fizzles in Katniss’s introspection—the first person present narration doesn’t help—about goings on within the districts, about the threats her sister and mother face, and about the two young men (Peeta and Gail) vying for her attention. It just takes too long to get to the good stuff.

This film version presents the two stories, but in the first half, it glides over the novel’s boring elements, dispatches with the introspection, and moves quickly in and out of less emotionally charged scenes. Additionally, the diversity in settings, ranging from the cold and desolate Victors’ Village where past Hunger Games winners reside to the technological pomposity and vivacious fashions at President Snow’s Capitol party, brings to the film a visual interest that the novel cannot achieve.

The first half of the film chronicles Katniss and Peeta’s victory tour, and drops hints, some subtle, others not so, at the rising tension between the wealthy Capitol and the twelve districts it oppresses. Katniss has her work cut out for her: she must keep her family safe from President Snow’s threats by convincing Panem that she loves Peeta (despite her uncertainty); she must placate the districts whose children were slaughtered in the game that she and Peeta won; and she must come to terms with the districts’ growing desire to embrace her as a symbol of revolution. All that, plus President Snow, the most powerful man in Panem, wants her dead.

The film shrewdly portrays the unrest within Panem. It’s in the crowds that Katniss and Peeta address. It’s in the graffiti that they glimpse while on the tour train, and it’s in their reactions to the growing presence of Capitol soldiers.

As it transitions into the second half, the film transfers to the filmgoer the pre-game jitters as effectively as did its predecessor. Then there is the tension and disorientation when Katniss gets conveyed to the arena where the game takes place. Water. Sunlight. Trees. Other tributes. The camera pans. Where’s Peeta? So much to absorb before the whistle blows and the killing begins.

Director Francis Lawrence also adds a few new touches in his approach to showing the game. This time around, the most antagonistic players take a back seat to the dangers that the elaborate setting hurls at Katniss, Peeta, and their alleged allies. With fewer subplot cuts, the film more thoroughly immerses the viewer in the action. And when a character dies, it’s fast. No dying speeches. No prolonged agony.

The film transcends other recent big budget action films by showing secondary characters with eccentricities and psychological, rather than physical, weaknesses. We meet individuals with backstories, and characters propelled by passions ranging from love to rage. Johanna Mason, portrayed as an axe-wielding femme fatale, strips naked in an elevator as her audience looks on with annoyance (Katniss), discomfort (Peeta), and admiration (drunken mentor Haymitch). Catching Fire also introduces District 4 playboy Finnick Odair. Although the flashy name underscores his arrogant façade, Odair is much more than a handsome hotshot.

A who’s who of recent Oscar winners and nominees bolsters the Catching Fire cast. Philip Seymour Hoffman offers a subdued, but by no means subpar performance as head gamekeeper Plutarch Heavensbee. Unlike other Capitol minions, Heavensbee wears little makeup and avoids flamboyant clothes. His smirk and his calculated comments suggest that he knows something that other characters don’t.

On the other extreme, actor Stanley Tucci endows Hunger Games host Caesar Flickerman with a trademark cackle and a kind of disingenuous fascination with the tributes he interviews. Flickerman’s gleaming teeth and purple hair are as vibrant as his movements and verbal flourishes. He is bullshit embodied.

Jennifer Lawrence’s portrayal of Katniss Everdeen is convincing and emotionally engaging. When Katniss and Peeta address a silent District 11 crowd during their victory tour, families mourn beneath giant screens that show recorded footage of their fallen children. While Peeta speaks, Lawrence uses facial expressions to convey a complex mix of emotions.

The role of Katniss Everdeen in the contemporary motion picture canon deserves mention. The typical action film portrays women as one-dimensional, highly sexual objects. Katniss makes a refreshing departure. She doesn't use sexuality to get what she wants, nor does she rely on magic or super powers. She only has her intelligence, her resolve, and her drive to protect those she loves. Perhaps Katniss represents not only a redeemer to the people of Panem, but also a new kind of heroine to the filmgoing public. Things are catching fire indeed. – Douglas J. Ogurek
Posted by Douglas J. Ogurek