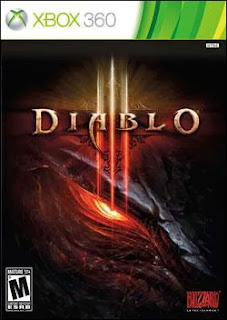 ) is the first of the series I’ve played, and since I don’t play games on the PC, the Xbox 360 version is a new game to me. It’s an isometric dungeon crawler, an action RPG where your heroes run around semi-randomly generated environments bashing hordes of creatures, fulfilling simple fetch-quests. Players can choose from wizard, demon hunter, barbarian, witch doctor and monk, and from male and female versions of each. The setting is pretty much indistinguishable from other fantasy games, with your regulation ghosts, zombies, skeletons etc to fight. Sometimes you get a funny feeling you’re just playing Dragon Age: Origins or Oblivion from a different point of view, though some laser-like magical powers would be more at home in Halo.

It feels slightly odd to be enjoying the game so much (we’ve yet to stop playing it), since there’s little here that wasn’t present in much older console games like Baldur’s Gate: Dark Alliance. This kind of gameplay more commonly shows up cut-price in the Xbox Live Arcade these days, in games like Torchlight, Realms of Ancient War and Daggerdale. The graphics, though they are pretty enough, don’t feel at first like a ten-year advance on Dark Alliance. But as enemies, powers and enemies’ powers accumulate you realise how well it all works, the game never visibly slowing despite the hundreds of objects flying around. The more you play, the more you appreciate the neat little touches that show how much work went into it.

It has a chemistry and balance that is difficult to define, though having a drop-in-drop-out four-player mode which works so well accounts for some of it. Put your controller down to sip your cup of tea and your character ambles along after your friends on their own – teleporting if need be – avoiding the most frustrating aspect of some previous games in a similar vein.

Similarly, a capacious sixty-slot backpack (at least in easy mode, in which we began playing it) makes for a free and easy approach to loot. As does the knowledge that it’s all fairly random: in other role-playing games, you worry that failing to explore every tunnel in every location might mean missing out on your one chance in a fifty-hour playthrough to get a key piece of equipment. Here you can just run around dungeons aimlessly looking for fights, and then afterwards check the map for unexplored territory. And you can save at any time without losing any treasure, making it perfect for brief gaming sessions.

It’s not very long, but like, say, the Dynasty Warriors games it’s designed to be replayed over and over, your character levelling up, acquiring magical weapons and armour, and training their travelling artisans. What I would think of as the “proper” roleplaying elements are perfunctory, the dialogue skippable, non-branching and quite missable, it being unnecessary (at least so far as I have found to date) to talk to anyone other than the indicated characters to acquire quests. It’s a vehicle stripped down to its chassis: fight monsters, open chest, get treasure, sell treasure. An endless torrent of glittering gold!

When I mention playing it with the children, you might look with concern to its age rating. But though it’s rated 15 by the BBFC, the ratings board judges games via video recordings rather than playthroughs, and, aside from a few particularly gory dungeons which I had to face alone, I’ve found this to be a super game to play with the younglings: they just love throwing jars full of spiders at the bad guys. Mrs Theaker has been playing it regularly too, despite the jars full of spiders, and I’d say it’s been our favourite family game since Castle Crashers and Scott Pilgrim.

The only flaw with regard to the multiplayer seems to be that all of us share one game save, regardless of who is logged in. It’s a bit annoying to have to wipe out my progress on a level when the children want to log in and play a section that’s a bit less challenging on a lower difficulty level. Maybe that’s because everyone created their characters within my initial game save, but it’s the only Xbox 360 game we’ve ever played that behaves in that way.

As usual, I haven’t played the game online, so I can’t comment on that. But otherwise, highly recommended, especially if you have chums at home to play it with.
Posted by Stephen Theaker