The Unsettled Dust and Other Stories by Robert Aickman, read by Reece Shearsmith, reviewed by Stephen Theaker 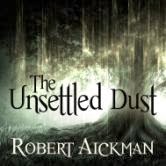 As far as I know, The Unsettled Dust and Other Stories by Robert Aickman (Audible, digital audiobook, 8 hrs 37 mins; supplied by publisher) has been my first taste of this writer’s work. He is of course very well regarded in horror circles, and has long been on my to-read-at-some-point list. I wasn’t disappointed.

The narrator of this edition, published by Audible themselves, is Reece Shearsmith of The League of Gentlemen. The recording is very clear. There are no sound effects or music, but their absence feels appropriate. His reading is splendid, aside from a couple of tiny fluffs.

In “The Unsettled Dust” (90 mins) he manages to find exactly the right tone to convey the stuffiness and dullness of its protagonist, Mr Oxenhope, without boring the listener; a clever trick. In that story Oxenhope tells us of his peculiar experiences while acting as the agent of a fund rather like the National Heritage. He is sent to a dusty old manor house in which two sisters live, and he becomes enamoured of one of them.

“The Houses of the Russians” is a creepy story about a property man looking for a good investment to bring a big fish; his evening walk takes him to an area where there are strange parties going on in every house. “No Stronger Than a Flower” is a warning to spouses tempted to badger their partners into changing, and in “The Cicerones” a solitary artist has a peculiar experience in a Belgian church. “The Next Glade”, one of five stories longer than an hour, introduces us to a bored housewife whose interest in extramarital diversions leads to trouble for her and her husband.

“Ravissante”, after a lengthy preamble discussing an awkward friendship, moves on to an artist’s account of his visit to the house of a elderly lady who gives him the willies, yet seems to be able to control him. “Bind Your Hair” concerns a woman struggling to resign herself to a very sensible marriage, who against all expectation goes out for a long walk on her own and meets a pair of odd children, their pigs and a very odd lady. The last story is the longest, “The Stains”, another steadily horrible story of a man who tries to settle with an unsuitable woman.

The stories all take their time, and never try too hard, having a take-it-or-leave-it attitude that is very dignified. They don’t try to knock you off your perch with cheap scares, but instead leave you wondering whether your apparently solid perch might actually be quite rotten. That subtlety and patience was admirable, even if my preference is more for writers who push the weirdness a little further, and don’t allow the dullness of the protagonists to set the pace of the stories to quite such an extent.

I found the audiobook best suited to headphones, its quiet, undemonstrative narration too easy to tune out with passive, ambient listening, and I’m sure that in the course of the book’s eight hours I missed several important details. It is worth allowing a period between each story, lest the protagonists run into one.

They tend to be drawn from the same well: men who would be better off avoiding marital entanglements, and less frequently the women who have become entangled with them. The theme, that women really are quite a bother, dates the book somewhat, since men who find women and their ways such a terrible nuisance are no longer required to marry them, but I still found myself gripped by the stories whenever they had my undivided attention.
Posted by Stephen Theaker