The Not Yet by Moira Crone, reviewed by Stephen Theaker 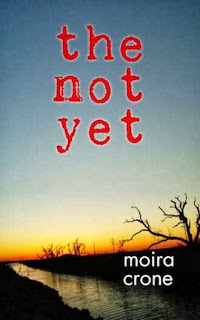 The Not Yet by Moira Crone (UNO Press, pb, 272pp). Malcolm de Lazarus is the Not-Yet of this book’s title, an orphan who spent his childhood performing in gruelling Sims to entertain the Heirs, a transhuman ruling class with fading memories of what it was like to really live. His earnings went into his Trust, and when he reaches the Boundarytime those savings should pay for his own longevity treatments. He’ll become one of them, shrunken and shrivelled within a spectacular skin-suit and headpiece – and he can’t wait. In 2121 we see him struggle to discover why his Trust is in escrow; whether a beloved mentor has betrayed him. Chapters from 2117 and subsequent years see the Sims business in ruins and the orphans in search of alternative work, bringing Malcolm into contact with Dr Susan Greenmore and her efforts to understand the chronic fogginess that afflicts the oldest of the Heirs. From earlier than that we see episodes from his childhood in the orphanage, where the children are taught to endure and shrug off the worst that can happen: it’s all Prologue.

This is I think Moira Crone’s first science fiction – previous literary fiction such as What Gets Into Us having examined the history of the South since the 1950s – but there’s no sense of dabbling: rather, of a writer who has identified science fiction as an effective method of addressing her concerns. Published by the University of New Orleans Press, it imagines a time when that region is mostly beneath the waves, and though some sections saw publication long before Hurricane Katrina, it feels like a reflection upon that disaster, imagining an America where the poor must paddle not just for a week or two, but for the rest of their lives. Its cover, at first glance an underwhelming photograph of a river and trees, gains resonance as the book proceeds, a reminder that this is not one of Vance’s far-off, extravagant worlds: it’s ours with a few nudges in the wrong direction.

Reflecting contemporary concerns about healthcare provision in the United States, the lives of those ordinary humans (Nats) will be short. All research into the diseases that affect them has been abandoned, partly to encourage them to save up and join the Heirs, but also because there’s no profit in it since the economy collapsed. In Malcolm’s horrid fascination with the Heirs, and disgust at such ordinary human processes as eating solid food, we see the way we idolise the ersatz, photoshopped faces on magazine covers and movie posters: he hates himself for his fascination with fleshy, human, real Tamara. It’s a novel that shows, in its ultimate underground anti-Sim, the Verite, where nothing is simulated at all, the degradation that ordinary men and women will endure to survive, to provide for their children – in this case, to fund an enclave’s transfer to new land before it’s too late – and while grieving for that degradation celebrates the pride of those who do not give up despite the most awful pressures.

Although The Not Yet delivers a stern warning about the present, and though it is published by a university press and written by a professor, it is by no means academic, dry or lecturing. From the first we share Malcolm’s febrile desperation to get his money back, even if we hope he won’t use it to turn himself into a monster. Like Taylor among the apes, he has a series of exciting adventures and uncovers the great secret of his world – the circumstances and consequences of the Reveal, when the Heirs made themselves public – much of which sounds horribly plausible; in many ways the novel resembles a story of alien occupation, the aliens our self-proclaimed heirs. The Not Yet should appeal to any reader with an appreciation for the kind of novels Silverberg wrote in the late sixties and early seventies: short, tense, discomfiting and serious-minded. An intelligent and thought-provoking piece of work.

After a bit of editing, this review appeared in Interzone #240, back in 2012.
Posted by Stephen Theaker