A Cold Season by Alison Littlewood, reviewed by Stephen Theaker 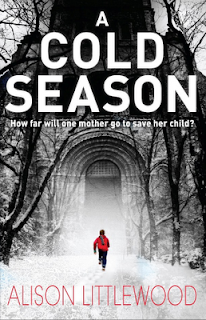 A Cold Season (Jo Fletcher Books, pb, 342pp), by Alison Littlewood, is the story of Cass and her son Ben, and what happens when they move to Darnshaw, the town where she grew up. She’s a young widow looking to reboot her life, he’s an angry little boy who misses his dad, lost to the war in Afghanistan. But when they arrive at their new home, theirs is the only apartment in Foxdene Mill that’s been finished and let, even though newspapers are piling up at the flat next door. It’s a bad start to a new life that only gets worse for Cass: bit by bit she loses the means of travel, her connection to the outside world, her ability to put food on the table, her relationship with her employer, and, worst of all, her connection to her son. All of these things have perfectly reasonable, non-supernatural explanations – snow has blocked the roads and downed the lines – but as friendly old Bert tells her, “It allus comes in like this, when he wants it.”

However terrifying things get, Cass has a tendency to rush back to bed (this is to some extent explained later in the story), but then it isn’t really the big, supernatural scares that are tearing her up – she could cope with those – it’s the awkwardnesses and embarrassments of quick conversations at the school gates; with overbearing mums she has no choice but to trust, or with Mr Remick, the nice teacher who seems to like her. It’s wondering whether a message has been passed on to her client; her son not wanting to talk to her, or swearing when he does; and knowing she’s been unfair to Bert and his lovable dog Captain. It’s an accumulation of small emotional wounds that leave her oblivious to the sword dangling over her head.

Over the last few years Alison Littlewood has provided a series of interesting stories to magazines like Black Static, Dark Horizons and my own Theaker’s Quarterly Fiction (so do bear in mind my possible bias). Each story I’ve read has been so different from the others that I had little idea what to expect from her first novel in terms of themes or even genre, though I knew to look forward to it. The book didn’t let me down; it’s a strong debut novel with potentially wide appeal, and the publisher has I think been wise in marketing to the mainstream. My mum, for example, would enjoy it at least as much as I did; probably more, since she’s had to deal with her own pair of Bens. Any parent will empathise with Cass’s struggle to understand the moods of her son, and any freelancer will relate to the very modern horror of losing their internet connection, but what I think this book does best is convey the horror that Cass feels at not being in control of her environment, her social encounters and even, ultimately, her actions.

Though the supernatural elements of the plot might not break much new ground, seeing how they affect this particular character in her particular circumstances does much to make them fresh. It’s a fairly quick read, consisting of thirty-eight short chapters, the text generously spaced, with all events seen from Cass’s perspective. The absence of the possessive “s” after Cass’s name throughout seemed a little old-fashioned to me (as did a web developer who uses floppy disks and hasn’t heard of Dropbox), but it’s a novel that is otherwise unfussy and clear. Not simplistic – it sent me to the dictionary a few times – but simply direct. Two images from the book soon turned up in my nightmares. The first would be a spoiler, but you’ll know it when you see it, out at the witch stones. The other is that one finished apartment in that part-renovated mill, its loneliness and isolation a physical symbol of what is happening to Cass.

After a bit of editing, this review appeared in Black Static #27, back in 2012.
Posted by Stephen Theaker